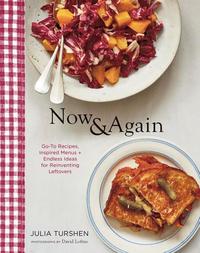 Named one of the most anticipated cookbooks by Eater, Epicurious, Food & Wine and was selected as a New York Times notable pick With 125+ delicious and doable recipes and 20 creative menu ideas for cooks of any skill level. Go-to recipes, inspired menus and ideas for reinventing leftovers: Now & Again will change the way we gather, eat and think about leftovers. In this new cookbook by the author of Small Victories, fans and newcomers alike will delight in Julia Turshen's funny and encouraging voice as she helps cooks of any skill level to gather friends and family around the table to share a meal (or many!) together. With more than 125 delicious and doable recipes including the popular Applesauce Cake with Cream Cheese Impress your guests with 20 inspiring menus for amazing social gatherings, holidays, and more Named one of the 100 Greatest Home Cooks of All Time by Epicurious, Julia Turshen is the bestselling author of the highly acclaimed and award-winning Now & Again, Feed the Resistance, and Small Victories. Now & Again is the type of cookbook you'll reach for time and time again. Approachable and designed with both novice and advanced cooks in mind, the recipes, ideas, and techniques for reinventing leftovers will become a staple in your kitchen. With 125+ delicious and doable recipes and 20 creative menu ideas for all levels of cooks, you will think about leftovers in an entirely new way Helpful "It's Me Again" recipes show how to use leftovers in new and delicious ways Tips on how to be smart and thrifty with food choices Selected as one of the Top 10 Jew-ish Cookbooks by The Forward and nominated for a Goodreads Choice Award for Best Cookbooks 2018. Helpful prep and plan timelines for flawlessly throwing a party
Visa hela texten

"Rethink the food you're about to throw-away with help from author and food expert Julia Turshen" -- Marie Claire "Her [Turshen's] voice is funny and encouraging, making this a great book for relatively new cooks." -- Rude Health "Cook from Julia Turshen's Now & Again, long-awaited sequel to the exceptional Small Victories" -- India Knight, The Sunday Times Magazine "Now & Again is an ode to the inherent charm of domestic life and features meals whose leftovers can be remixed and made new again." -- New York Magazine "Turshen's talent was palpable; I knew she'd be back sooner rather than later. After a break for last year's bite-sized Feed the Resistance, Turshen's back with 300 pages of big, beautiful food." -- NPR "the author knows how to write simple, appealing recipes and recognizes the need for menu advice." -- Washington Post "Turshen's latest volume takes leftovers very seriously; as she moves through meal occasions from breakfast through to holiday feasts, mini recipes transform leftovers into new dishes." -- Easy Food

Julia Turshen is the bestselling author of Now & Again, Feed the Resistance, named the Best Cookbook of 2017 by Eater, and Small Victories, named one of the Best Cookbooks of 2016 by the New York Times and NPR. She has coauthored numerous cookbooks and hosted the first two seasons of Radio Cherry Bombe. She has written for the New York Times, the Washington Post, the Wall Street Journal, Vogue, Bon Appetit, Food & Wine, and Saveur. Epicurious has called her one of the 100 Greatest Home Cooks of All Time. She is the founder of Equity At The Table (EATT), an inclusive digital directory of women and non-binary individuals in food. Julia lives in the Hudson Valley with her wife and pets.