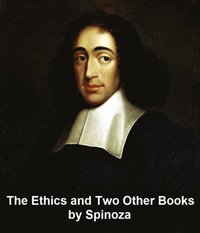 Ethics and Two Other Books E-bok

av Baruch Spinoza
E-bok (EPUB - DRM), Engelska, 2018-03-01
19
Ladda ned
Spara som favorit
Ladda ned och läs i en e-boksläsare. Tips på appar
This file includes: The Ethics, On the Improvement of the Understanding, and A Theologico-Political Treatise (all four parts). According to Wikipedia: &quoteBaruch or Benedict de Spinoza (November 24, 1632 - February 21, 1677) was a Dutch philosopher of Portuguese Jewish origin. Revealing considerable scientific aptitude, the breadth and importance of Spinoza's work was not fully realized until years after his death. Today, he is considered one of the great rationalists of 17th-century philosophy, laying the groundwork for the 18th century Enlightenment and modern biblical criticism. By virtue of his magnum opus, the posthumous Ethics, in which he opposed Descartes' mind-body dualism, Spinoza is considered to be one of Western philosophy's most important philosophers. Philosopher and historian Georg Wilhelm Friedrich Hegel said of all modern philosophers, &quoteYou are either a Spinozist or not a philosopher at all.&quote All of Spinoza's works were listed on the Index Librorum Prohibitorum (List of Prohibited Books) by the Roman Catholic Church. Spinoza lived quietly as a lens grinder, turning down rewards and honors throughout his life, including prestigious teaching positions, and gave his family inheritance to his sister.&quote
Visa hela texten