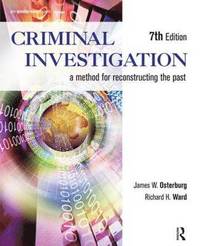 A Method for Reconstructing the Past

James W. Osterburg was long involved in the investigation process, actively engaged in the functions of teaching, research, and public service. For 20 years, Osterburg served as a sworn member of the New York City Police Department (NYPD), where he assisted in the investigation of thousands of serious crimes. He testified in municipal, state, and federal courts on numerous occasions, and taught at the NYPD Police Academy. His academic affiliations include professorships at the University of Illinois at Chicago (Professor Emeritus); Indiana University; the University of California, Berkeley; the Baruch School of Public Administration at the City University of New York; and Sam Houston State University (as Beto Professor of Criminal Justice). A frequent participant in educational symposia, he discussed criminal investigation, criminalistics, fingerprint characteristics, and scientific evidence, and authored books on criminalistics and scientific investigation. His articles were published in a variety of scholarly journals, including the Journal of Criminal Law, Criminology, and Police Science; the Journal of the Forensic Sciences; the Journal of the American Statistical Association; and the Journal of Police Science and Administration. A Fellow and past president of the American Academy of Forensic Sciences, Osterburg served on the ad hoc committee appointed by the Academy president to review the homicide of Robert F. Kennedy and to help resolve the controversy that arose subsequent to the conviction of Sirhan B. Sirhan regarding some of the firearms evidence. Most recently, Osterburg was awarded the 2010 Paul L. Kirk Award, the highest award conferred by the Criminalistics Section of the American Academy of Forensic Sciences (AAFS), and was named a Distinguished Fellow Honoree at the 2012 AAFS conference. Richard H. Ward is currently Associate Vice President for Research and Special Programs at the University of New Haven. He recently left the position of Dean of the Henry C. Lee College of Criminal Justice and Forensic Sciences there. A former New York City Detective, Dr. Ward is an internationally recognized expert on issues related to criminal investigation and global crime.