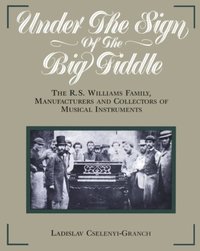 The R.S. Williams Family, Manufacturers and Collectors of Musical Instruments

av Ladislav Cselenyi-Granch
E-bok (PDF - DRM), Engelska, 1996-10-15
212
Ladda ned
Spara som favorit
Ladda ned och läs i en e-boksläsare. Tips på appar
Finns även som
Visa alla 1 format & utgåvor
Musical-instrument manufacturing was one of the few areas in which Canada was able to compete with the United States and England in the 19th and early 20th centuries. This book describes one of the leading firms in the music industry in Canada at that time. The Toronto business that was conducted under the sign of the &quoteBig Fiddle&quote added significantly to the spread of music in the city of Toronto and far beyond. The founder of this family business was Richard Sudgen Williams. With his son, R.S. Williams Jr., he is also responsible for amassing what is perhaps the earliest collection of musical instruments in Canada, and what is certainly one of the largest. Of great documentary significance and value to this book are the catalogues published by the R.S. Williams firm that the author consulted during his extensive research. Of the ten catalogues cited, three can be found as part of the R.S. Williams Collection in the Royal Ontario Museum. The rest reside in the National Library of Canada and in the personal collection of Michael Remenyi in Toronto.
Visa hela texten