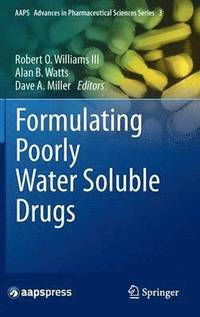 av Robert O Williams Iii, Alan B Watts, Dave A Miller
Inbunden Engelska, 2011-12-03
3209
Köp
Spara som favorit
Skickas inom 10-15 vardagar.
Gratis frakt inom Sverige över 159 kr för privatpersoner.
Finns även som
Visa alla 5 format & utgåvor
This volume is intended to provide the reader with a breadth of understanding regarding the many challenges faced with the formulation of poorly water-soluble drugs as well as in-depth knowledge in the critical areas of development with these compounds. Further, this book is designed to provide practical guidance for overcoming formulation challenges toward the end goal of improving drug therapies with poorly water-soluble drugs. Enhancing solubility via formulation intervention is a unique opportunity in which formulation scientists can enable drug therapies by creating viable medicines from seemingly undeliverable molecules. With the ever increasing number of poorly water-soluble compounds entering development, the role of the formulation scientist is growing in importance. Also, knowledge of the advanced analytical, formulation, and process technologies as well as specific regulatory considerations related to the formulation of these compounds is increasing in value. Ideally, this book will serve as a useful tool in the education of current and future generations of scientists, and in this context contribute toward providing patients with new and better medicines.
Visa hela texten