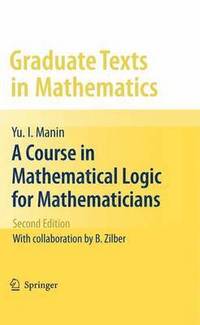 A Course in Mathematical Logic for Mathematicians

av Yu I Manin
Häftad Engelska, 2012-03-03
769
Köp
Spara som favorit
Skickas inom 10-15 vardagar.
Gratis frakt inom Sverige över 159 kr för privatpersoner.
Finns även som
Visa alla 2 format & utgåvor
1. The ?rst edition of this book was published in 1977. The text has been well received and is still used, although it has been out of print for some time. In the intervening three decades, a lot of interesting things have happened to mathematical logic: (i) Model theory has shown that insights acquired in the study of formal languages could be used fruitfully in solving old problems of conventional mathematics. (ii) Mathematics has been and is moving with growing acceleration from the set-theoretic language of structures to the language and intuition of (higher) categories, leaving behind old concerns about in?nities: a new view of foundations is now emerging. (iii) Computer science, a no-nonsense child of the abstract computability theory, has been creatively dealing with old challenges and providing new ones, such as the P/NP problem. Planning additional chapters for this second edition, I have decided to focus onmodeltheory,the conspicuousabsenceofwhichinthe ?rsteditionwasnoted in several reviews, and the theory of computation, including its categorical and quantum aspects. The whole Part IV: Model Theory, is new. I am very grateful to Boris I. Zilber, who kindly agreed to write it. It may be read directly after Chapter II. The contents of the ?rst edition are basically reproduced here as Chapters I-VIII. Section IV.7, on the cardinality of the continuum, is completed by Section IV.7.3, discussing H. Woodin's discovery.
Visa hela texten

From the reviews of the second edition: "As one might expect from a graduate text on logic by a very distinguished algebraic geometer, this book assumes no previous acquaintance with logic, but proceeds at a high level of mathematical sophistication. Chapters I and II form a short course. Chapter I is a very informal introduction to formal languages, e.g., those of first order Peano arithmetic and of ZFC set theory. Chapter II contains Tarski's definition of truth, Goedel's completeness theorem, and the Loewenheim-Skolem theorem. The emphasis is on semantics rather than syntax. Some rarely-covered side topics are included (unique readability for languages with parentheses, Mostowski's transitive collapse lemma, formalities of introducing definable constants and function symbols). Some standard topics are neglected. (The compactness theorem is not mentioned!) The latter part of Chapter II contains Smullyan's quick proof of Tarski's theorem on the undefinability of truth in formal arithmetic, and an account of the Kochen-Specker "no hidden variables" theorem in quantum logic. There are digressions on philosophical issues (formal logic vs. ordinary language, computer proofs). A wealth of material is introduced in these first 100 pages of the book..."--MATHEMATICAL REVIEWS "Manin's book on mathematical logic is addressed to a working-mathematician with some knowledge of naive set theory ... . incorporate some of the exciting developments in mathematical logic of the last four decades into this edition. ... The exquisite taste and the elegant style of the author have produced an outstanding treatment of mathematical logic that allows one to understand some of the pillars of this area of mathematical research ... and Manin's original treatment of the subject provides an extraordinary introduction to mathematical logic." (F. Luef, Internationale Mathematische Nachrichten, Issue 217, August, 2011) "The new extended title of this book corresponds more to its concept, contents, spirit and style. The book is really addressed to mathematicians and introduces the reader to the glorious discoveries in logic during the last century through the difficult and subtle results, problems, proofs and comments. ... due to the author's brilliant style, each part of the book provokes new opinions and pleasure of a different understanding of basic results and ideas of contemporary mathematical logic." (Branislav Boricic, Zentralblatt MATH, Vol. 1180, 2010)