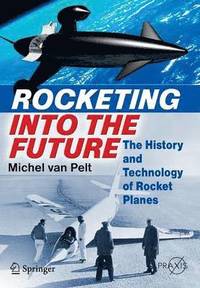 Rocketing Into the Future

The History and Technology of Rocket Planes

av Michel Van Pelt
Häftad Engelska, 2012-05-31
479
Köp
Spara som favorit
Skickas inom 10-15 vardagar.
Fri frakt inom Sverige för privatpersoner.
Finns även som
Visa alla 1 format & utgåvor
This book describes the technology, history, and future of rocket planes. Michel van Pelt journies into this exciting world, examining the exotic concepts and actual flying vehicles that have been devised over the last hundred years. He recounts the history of rocket airplanes, from the early pioneers who attached simple rockets onto their wooden glider airplanes to the modern world of high-tech research vehicles. The author visits museums where rare examples of early rocket planes are kept and modern laboratories where future spaceplanes are being developed. He explains the technology in an easily understandable way, describing the various types of rocket airplanes and looking at the possibilities for the future. Michel van Pelt considers future spaceplanes, presenting various modern concepts and developments. He describes the development from cutting edge research via demonstrator vehicles to operational use. He also evaluates the replacement of the Space Shuttle with a seemingly old-fashioned capsule system, the parallel developments in suborbital spaceplanes such as SpaceShipOne and SpaceShipTwo, piloted versus automatic flight, and related developments in airliners and military aircraft.
Visa hela texten

From the reviews: "Whatever level of interest you have in rocket-powered human aviation (and hence spaceflight), this book covers it. For someone getting into the subject for the first time there is more than enough detail ... . the book gives the basics of aeronautics and rocketry, which are well-explained with some helpful line diagrams. ... British Interplanetary Society members are no doubt familiar with Skylon; if you are not you will be once you have read this book!" (Malcolm Smith, Astronomy Now, July, 2013) "This book covers the history of rocket planes from earliest endeavors to the present designs of suborbital rocket planes marketed for space tourism purposes. ... The book is well written, well organized, and well illustrated. A useful resource for people interested in both aviation history and the history of space technology. Summing Up: Highly recommended. All readership levels." (A. M. Strauss, Choice, Vol. 50 (4), December, 2012)

For the last ten years, Michel Van Pelt has been working as a cost engineer, system engineer and as Concurrent Design Facility team leader for the technical center of the European Space Agency ESA in the Netherlands. He is involved in many ESA space projects during many phases, which has given him a uniqe insight in the definition, conceptual design, development, launch and operation of spacecraft. Specifically, through hiswork in ESA's Concurrent Design Facility for conceptual design studies, Van Pelt has a deep understanding of the various scientific, technical, financial and political issues and constraints that drive the development of spacecraft, as well as a broad knowledge of innovative ideas for future launchers and space missions. Van Pelt has written many articles on space and is an editor and writer for two Dutch spaceflight magazines. In addition, he regularly does presentations on space related topics for student associations etc. He has three books published through Springer/Praxis: "Space Tourism: Adventures in Earth Orbit and Beyond" (2005), "Space Invaders: How Robotic Spacecraft Explore the Solar System" (2006), and "Space Tethers and Space Elevators" (2009).