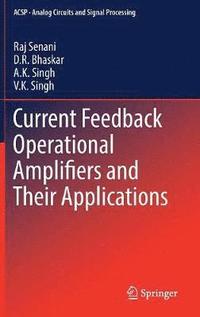 av Raj Senani, D R Bhaskar, A K Singh, V K Singh
Inbunden Engelska, 2013-02-20
1419
Köp
Spara som favorit
Skickas inom 10-15 vardagar.
Fri frakt inom Sverige för privatpersoner.
Finns även som
Visa alla 2 format & utgåvor
This book describes a variety of current feedback operational amplifier (CFOA) architectures and their applications in analog signal processing/generation. Coverage includes a comprehensive survey of commercially available, off-the-shelf integrated circuit CFOAs, as well as recent advances made on the design of CFOAs, including design innovations for bipolar and CMOS CFOAs. This book serves as a single-source reference to the topic, as well as a catalog of over 200 application circuits which would be useful not only for students, educators and researchers in apprising them about the recent developments in the area but would also serve as a comprehensive repertoire of useful circuits for practicing engineers who might be interested in choosing an appropriate CFOA-based topology for use in a given application.
Visa hela texten