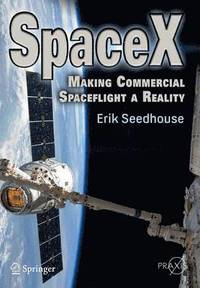 av Erik Seedhouse
Häftad Engelska, 2013-06-15
329
Köp
Spara som favorit
Skickas inom 5-8 vardagar.
Fri frakt inom Sverige för privatpersoner.
Finns även som
Visa alla 1 format & utgåvor
This first account of commercial spaceflight's most successful venture describes the extraordinary feats of engineering and human achievement that have placed SpaceX at the forefront of the launch industry and made it the most likely candidate for transporting humans to Mars. Since its inception in 2002, SpaceX has sought to change the space launch paradigm by developing a family of launch vehicles that will ultimately reduce the cost and increase the reliability of space access tenfold. Coupled with the newly emerging market for governmental, private, and commercial space transport, this new model will re-ignite humanity's efforts to explore and develop space. Formed in 2002 by Elon Musk, the founder of PayPal and the Zip2 Corporation, SpaceX has already developed two state-of-the-art new launch vehicles, established an impressive launch manifest, and been awarded COTS funding by NASA to demonstrate delivery and return of cargo to the ISS. This book describes how simplicity, low-cost, and reliability can go hand in hand, as promoted in the philosophy of SpaceX. It explains how, by eliminating the traditional layers of internal management and external sub-contractors and keeping the vast majority of manufacturing in house, SpaceX reduces its costs while accelerating decision making and delivery, controls quality, and ensures constant liaison between the design and manufacturing teams.
Visa hela texten

Dr. Erik Seedhouse worked as Astronaut Training Consultant for Bigelow Aerospace in 2005, a company for whom he wrote the Spaceflight Participants Flight Surgeon's Manual. He also developed astronaut-training protocols for future spaceflight participants and wrote and edited several chapters of Bigelow Aerospace's Astronaut Training Manual. Erik is a research scientist specializing in environmental life sciences and physiology, the subject in which he obtained his Ph.D. in Physiology while working for the European Space Agency between 1996 and 1998. In 2009, he was one of the final candidates for selection as an astronaut in the CSA's Astronaut Recruitment Campaign. He is the Training Director for Astronauts for Hire (A4H) and is the Canadian Forces' High Risk Acceleration Training Officer, which means he spins CF pilots in Canada's centrifuge. He is the author of several space exploration titles, and his most recent "Astronaut's for Hire" was published in January 2012.