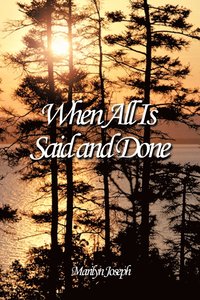 When All Is Said and Done

Persevering Anne McGill's unrelenting comments was easy compared to Amanda not understanding the change in her husband. Mitch had become unpredictable, irrational and not the man she married.

She was astounded when he informed her he did not want to remain at GNC's helm five years after its inception, choosing again to travel to the world's hot spots "to get the story."

Singled out by print media to challenge President Barack Obama in 2012, Mitch chose to make his own decision.

Meanwhile, Amanda's Micah Foundation flourished. Its efforts in New Orleans, Haiti, Tuscaloosa and Joplin as well as over a thousand programs receiving grants, changed countless people's lives. Her efforts would also have a profound impact on childhood nutrition.

However, no one could have anticipated the confluence of events directly impacting them by a homegrown terrorist seeking revenge. And then terror reared it heinous head again just four months later.

Chippewa Falls, Wisconsin was Amanda's remedy for healing their family. To her it was and had always been "God's Country." Was she being fair to Mitch with her decision to take their children there? That remained to be seen when all was said and done.
Visa hela texten

Bloggat om When All Is Said and Done