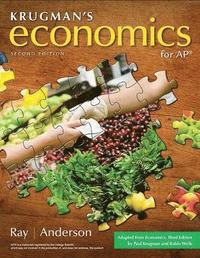 av Paul Krugman, David A Anderson, Margaret Ray, Robin Wells
Inbunden Engelska, 2015-01-23
2669
Köp
Spara som favorit
Krugman's Economics for AP (R), Second Edition is designed to be easy to read and easy to use. This book is your ultimate tool for success in the AP (R) Economics course and exam. The text combines the successful storytelling, vivid examples, and clear explanations of Paul Krugman and Robin Wells with the AP (R) expertise of Margaret Ray and David Anderson. In this exciting new edition of the AP (R) text, Ray and Anderson successfully marry Krugman's engaging approach and captivating writing with content based on The College Board's AP (R) Economics Course outline, all while focusing on the specific needs and interests of high school teachers and students.
Visa hela texten

David Anderson is the Paul G. Blazer Professor of Economics at Centre College. He received his BA in economics from the University of Michigan and his MA and PhD in economics from Duke University. Anderson has been involved in the AP (R) Economics programs for more than two decades. For five years he led the grading of one or both of the AP (R) Economics exams, and he speaks regularly at AP (R) conferences and workshops. He has authored dozens of scholarly articles and 15 books, including Explorations in Economics, Survey of Economics, Cracking the AP (R) Economics Exam, Economics by Example, Favorite Ways to Learn Economics, and Environmental Economics and Natural Resource Management . His research is primarily on economic education, environmental economics, law and economics, and labor economics. Anderson loves teaching introductory economics and has won awards for excellence and innovation in the classroom. His favorite hobby is running, and he competes in marathons and triathlons. He lives in Danville, Kentucky, with his wife and two children.