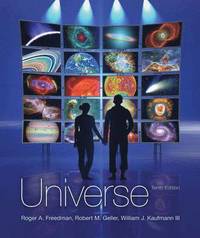 Roger A. Freedman is a Lecturer in Physics at the University of California, Santa Barbara, USA. At UCSB, Dr. Freedman has taught in both the Department of Physics and the College of Creative Studies, a branch of the university intended for highly gifted and motivated undergraduates. He has published research in nuclear physics, elementary particle physics, and laser physics. In recent years, he has helped to develop computer-based tools for learning introductory physics and astronomy and helped pioneer the use of classroom response systems and the "flipped" classroom model at UCSB. He is co-author of three introductory textbooks: University Physics (Pearson), Universe (Freeman), and Investigating Astronomy (Freeman). Robert M. Geller teaches and conducts research in astrophysics at the University of California, Santa Barbara, USA. Using data from the Hubble Space Telescope, he is currently involved in a search for bursts of lights that are predicted to occur when a supermassive black hole consumes a star. Dr. Gellar als has a strong emphasis on education, and he received the Distinguished Teaching Award at UCSB in 2003. William J. Kaufman III (deceased) was the author of the first four editions of Universe. During his career he held positions at the Griffith Observatory in Los Angeles, San Diego State University, UCLA, Caltech, and the University of Illinois. A prolific author, his many books include Black Holes and Warped Spacetime, Relativity and Cosmology, The Cosmic Frontiers of General Relativity, Exploration of the Solar System, Planets and Moons, Stars and Nebulas, Galaxies and Quasars, and Supercomputing and the Transformation of Science. Dr. Kaufmann died in 1994.

PART I: INTRODUCING ASTRONOMY 1. Astronomy and the Universe Guest Essay: Why Astronomy? by Sandra M. Faber 2. Knowing the Heavens Guest Essay: Why Astrology Is Not Science by James Randi 3. Eclipses and the Motion of the Moon Guest Essay: Archaeoastronomy and Ethnoastronomy by Mark Hollabaugh 4. Gravitation and the Waltz of the Planets 5. The Nature of Light 6. Optics and Telescopes PART II: PLANETS AND MOONS 7. Comparative Planetology I: Our Solar System 8. Comparative Planetology II: The Origin of Our Solar System Scientific American article: Dangling a COROT by Alexander Hellemans 9. The Living Earth 10. Our Barren Moon 11. Mercury, Venus, and Mars: Earthlike yet Unique Scientific American article: Father of Spirit and Opportunity by David Appell 12. Jupiter and Saturn: Lords of the Planets 13. Jupiter and Saturn's Satellites of Fire and Ice 14. Uranus, Neptune, Pluto, and the Kuiper Belt: Remote Worlds 15. Vagabonds of the Solar System Guest Essay: Pluto and the Kuiper Belt by Scott Sheppard PART III: STARS AND STELLAR EVOLUTION 16. Our Star, the Sun 17. The Nature of the Stars 18 The Birth of Stars 19. Stellar Evolution: On and After the Main Sequence 20. Stellar Evolution: The Deaths of Stars 21. Neutron Stars 22. Black Holes PART IV: GALAXIES AND COSMOLOGY 23. Our Galaxy 24. Galaxies 25. Quasars and Active Galaxies 26. Cosmology: The Origin and Evolution of the Universe Scientific American article: Dark Forces at Work by David Appell 27. Exploring the Early Universe Scientific American article: Making Sense of Modern Cosmology by P. James E. Peebles 28. The Search for Extraterrestrial Life Guest Essay: A Biologist's View of Astrobiology by Kevin W. Plaxco