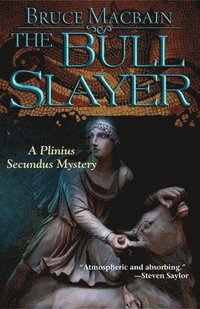 av Bruce MacBain
Häftad Engelska, 2013-03-01
229
Köp
Spara som favorit
Skickas inom 10-15 vardagar.
Gratis frakt inom Sverige över 159 kr för privatpersoner.
Finns även som
Visa alla 1 format & utgåvor
Praise for The Bull Slayer... "Brilliant....An excellent series. And I look forward to more." -Robert Fabbri, author of Vespasian, Tribune of Rome A turbulent frontier province, seething with corruption and hatred of Rome; a barbarian god whose devotees may include a murderer; a clever and unscrupulous faith healer who knows everyone's secrets; a boy who struggles toward manhood: these are the elements in Pliny's latest investigation. Newly appointed governor of Bithynia, Pliny finds a high Roman official murdered miles from the capital. But as Pliny, far from Rome and the Emperor Trajan, pursues one baffling lead after another, he is betrayed where he least expects it: at home. Bruce Macbain holds degrees in Classics and Ancient History and has taught Greek and Roman history at Vanderbilt and Boston Universities. He lives with his wife in Massachusetts. www.brucemacbain.com
Visa hela texten

Bruce Macbain holds degrees in Classics and Ancient History and has taught Greek and Roman history at Vanderbilt and Boston Universities. His special interests are ancient medicine and religion in the Roman empire. He brings these together in his fiction--"Roman Games" (2010) and "The Bull Slayer "(2013). He lives with his wife in Brookline, Massachusetts.