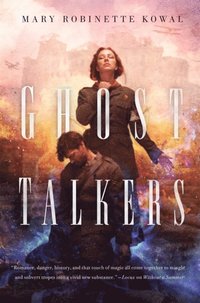 av Mary Robinette Kowal
E-bok (EPUB - DRM), Engelska, 2016-08-16
109
Ladda ned
Spara som favorit
Laddas ned direkt
Läs i vår app för iPhone, iPad och Android
Finns även som
Visa alla 2 format & utgåvor
&quotePowerful, laden with emotion, and smartly written.&quote -Brandon Sanderson, author of Mistborn and The Way of KingsA brilliant historical fantasy novel from acclaimed author Mary Robinette Kowal featuring the mysterious spirit corps and their heroic work in World War I. Ginger Stuyvesant, an American heiress living in London during World War I, is engaged to Captain Benjamin Harford, an intelligence officer. Ginger is a medium for the Spirit Corps, a special Spiritualist force. Each soldier heading for the front is conditioned to report to the mediums of the Spirit Corps when they die so the Corps can pass instant information about troop movements to military intelligence. Ginger and her fellow mediums contribute a great deal to the war efforts, so long as they pass the information through appropriate channels. While Ben is away at the front, Ginger discovers the presence of a traitor. Without the presence of her fiance to validate her findings, the top brass thinks she's just imagining things. Even worse, it is clear that the Spirit Corps is now being directly targeted by the German war effort. Left to her own devices, Ginger has to find out how the Germans are targeting the Spirit Corps and stop them. This is a difficult and dangerous task for a woman of that era, but this time both the spirit and the flesh are willing... Other BooksForest of MemoryGlamour in GlassOf Noble FamilyShades of Milk and HoneyValour and VanityWithout a SummerAt the Publisher's request, this title is being sold without Digital Rights Management Software (DRM) applied.
Visa hela texten