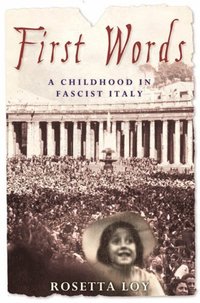 A Childhood in Fascist Italy

av Rosetta Loy
E-bok (EPUB - DRM), Engelska, 2014-08-12
109
Ladda ned
Spara som favorit
Laddas ned direkt
Läs i vår app för iPhone, iPad och Android
An internationally acclaimed novelist and journalist movingly chronicles her childhood in Rome during World War II, providing a rare account by a Catholic of Jewish persecution and Papal responsibility In 1937, Rosetta Loy was a privileged five-year-old growing up in the heart of the well-to-do Catholic intelligentsia of Rome. But her childhood world of velvet and lace, airy apartments, indulgent nannies, and summers in the mountains was also the world of Mussolini's fascist regime and the increasing oppression of Italian Jews. Loy interweaves the two Italys of her early years, shifting with powerful effect from a lyrical evocation of the many comforts of her class to the accumulation of laws stipulating where Jews were forbidden to travel and what they were not allowed to buy, eat, wear, and read. She reveals the willful ignorance of her own family as one by one their neighbors disappeared, and indicts journalists and intellectuals for their blindness and passivity. And with hard-won clarity, she presents a dispassionate record of the role of the Vatican and the Catholic leadership in the devastation of Italy's Jews.Written in crystalline prose, First Words offers an uncommon perspective on the Holocaust. In the process, Loy reveals one writer's struggle to reconcile her memories of a happy childhood with her adult knowledge that, hidden from her young eyes, one of the world's most horrifying tragedies was unfolding.
Visa hela texten