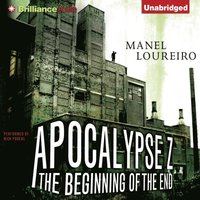 Beginning of the End (ljudbok)

av Manel Loureiro
Ljudbok (MP3), Engelska, 2012-10-23
169
Ladda ned
Spara som favorit
Laddas ned direkt
Lyssna i vår app för iPhone, iPad och Android
The dead rise A mysterious incident in Russia, a blip buried in the newsits the only warning humanity receives that civilization will soon be destroyed by a single, voracious virus that creates monsters of men. Humanity falls A lawyer, still grieving over the death of his young wife, begins to write as a form of therapy. Bur he never expected that his anonymous blog would ultimately record humanitys last days. The end of the world has begun Governments scramble to stop the zombie virus, people panic, so-called Safe Havens are established, the world erupts into chaos; soon its every man, woman, and child for themselves. Armed only with makeshift weapons and the will to live, a lone survivor will give mankind one last chance against Apocalypse Z
Visa hela texten