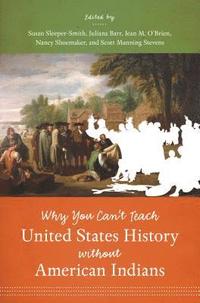 Why You Can't Teach United States History without American Indians

Well-written and generously illustrated, this rich resource merits a place on the bookshelves of everyone teaching American history.--Journal of American History Provide[s] a usable 'toolkit' for non-specialists to incorporate contemporary scholarship on American Indian history into the undergraduate curriculum.--Register of the Kentucky Historical Society Exciting and practical suggestions for reconsidering how we approach making Indians central to our narratives of US history.--H-Net Contains a wealth of information that reorients the U.S. history narrative. Anyone who teaches U.S. history should read this easily accessible, thought-provoking book.--New Mexico Historical Review An excellent book...forces instructors to reexamine their pedagogy and think twice about what they teach and what students may be unconsciously taking away from the standard narratives.--The Chronicles of Oklahoma A tremendously powerful book.--Minnesota History [This] collection succeeds admirably, providing a variety of tools for incorporating Native American history in ways that promise to challenge and excite our students. It deserves to be read widely, and it will reward those teachers who take its message to heart.--Journal of Southern History [An] exceptional set of chapters. . . . [Brings] together impressive scholars from a broad range of fields. . . . [And] recognize[s] the need to go beyond the usual retelling of U.S. history.--Journal of Interdisciplinary History There are insights in this volume that can benefit even the most seasoned instructors.--NAIS A mandatory purchase for all libraries. --CHOICE