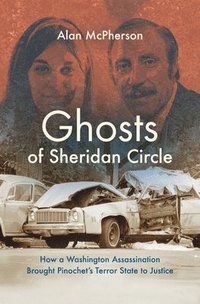 How a Washington Assassination Brought Pinochet's Terror State to Justice

av Alan McPherson
Inbunden Engelska, 2019-10-30
479
Köp
Spara som favorit
Skickas inom 5-8 vardagar.
Fri frakt inom Sverige för privatpersoner.
Finns även som
Visa alla 1 format & utgåvor
On September 21, 1976, a car bomb killed Orlando Letelier, the former Chilean ambassador to the United States, along with his colleague Ronni Moffitt. The murder shocked the world, especially because of its setting--Sheridan Circle, in the heart of Washington, D.C. Letelier's widow and her allies immediately suspected the secret police of Chilean dictator Augusto Pinochet, who eliminated opponents around the world. Because U.S. political leaders saw the tyrant as a Cold War ally, they failed to warn him against assassinating Letelier and hesitated to blame him afterward. Government investigators and diplomats, however, pledged to find the killers, defying a monstrous, secretive regime. Was justice attainable? Finding out would take nearly two decades. With interviews from three continents, never-before-used documents, and recently declassified sources that conclude that Pinochet himself ordered the hit and then covered it up, Alan McPherson has produced the definitive history of one of the Cold War's most consequential assassinations. The Letelier car bomb forever changed counterterrorism, human rights, and democracy. This page-turning real-life political thriller combines a police investigation, diplomatic intrigue, courtroom drama, and survivors' tales of sorrow and tenacity.
Visa hela texten

An important book about the role of Augusto Pinochet's military government in the 1976 assassination of prominent Chilean opposition leader Orlando Letelier in Washington, DC. . . . A very well-organized and documented account.--CHOICE McPherson leaves no stone unturned to uncover every turn and twist in the unavoidably complicated plot that leads from the explosion to Pinochet.--Heythrop Journal It's highly readable and entirely accessible even if you have no background knowledge of Chile or the general context at all. It is a case of slow-moving justice against petty and murderous terrorists.--Two Weeks Notice This painful, exciting, and moving tale. . . . Pays moving homage to a profound tragedy and to the resilience of a band of people who, over the course of decades, fought and helped to win a measure of justice for their loved ones and for tens of thousands of victims. It is a story that will likely linger with you for a long time.--North American Congress on Latin America - Report on the Americas Justice, and the many obstacles to its attainment, is the unstated theme of Alan McPherson's Ghosts of Sheridan Circle, a history of a great political crime and its aftermath. . . . To tell this story, Alan McPherson . . . has tempered the dry precision of academic history with stylistic elements borrowed from the true-crime genre: nonfiction storytelling that generates horror, sympathy and suspense.--TheForeign Service Journal

Alan McPherson is professor of history at Temple University and the author of The Invaded: How Latin Americans and their Allies Fought and Ended U.S. Occupations.