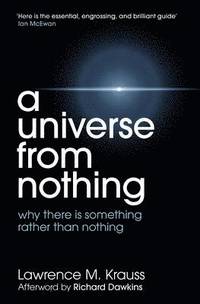 A Universe From Nothing

av Lawrence M Krauss
(5 röster)  |  Läs 1 recension
Häftad Engelska, 2012-09-13
129
Köp
Spara som favorit
Finns även som
Visa alla 1 format & utgåvor
Internationally renowned theoretical physicist and bestselling author Lawrence Krauss offers provocative, revelatory answers to the biggest philosophical questions: Where did our universe come from? Why does anything exist? And how is it all going to end? 'Why is there something rather than nothing?' is the question atheists and scientists are always asked,and until now there has not been a satisfying scientific answer. Today, exciting scientific advances provide new insight into this cosmological mystery: not only cansomething arise from nothing, but something willalwaysarise from nothing. A mind-bending trip back to the beginning of the beginning, A Universe from Nothingauthoritatively presents the most recent evidence that explains how our universe evolved - and the implications for how it's going to end. It will provoke, challenge, and delight readers to look at the most basic underpinnings of existence in a whole new way. In the words of Richard Dawkins: this could potentially be the most important scientific book since Darwin's On the Origin of Species.
Visa hela texten

Lawrence M. Krauss is director of the Origins Project at Arizona State University. He is the author of more than 300 scientific publications and nine books, and the recipient of numerous international awards for his research and writing. Hailed by Scientific American as a 'rare scientific public intellectual', he is also a regular columnist for newspapers and magazines and appears frequently on radio and television.