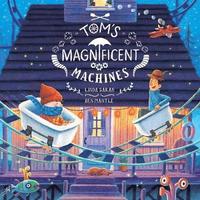 av Linda Sarah
Häftad Engelska, 2018-08-23
99
Köp
Spara som favorit
A magical, captivating picture book about the power of love between a son and his father Tom and his dad are good at making things. Their inventions start out simple, but they quickly become bigger, faster, crazier - and they almost always involve wheels. But then Dad loses his job, and everything changes. Sadness clouds the house like a winter sky. That is, until Tom comes up with a brilliant plan that takes their amazing vehicle inventions and creates something astounding - something the world has never seen before . . . An emotionally charged and highly imaginative book that explores themes of love and support between children and their parents but is also great fun, with incredible inventions, crazy contraptions and a wonderfully inspiring pioneering spirit at its heart.
Visa hela texten

Linda grew up dreaming of being a fire fighter. That was before she moved to Paris, working as a singer and piano player while raising her son. She returned to Britain and got her Fine Art degree at the Slade School of Fine Art, whilst working as a waitress and a few other small things. She then started making children's books, which she thinks is the best job ever! (and would never have made a good firefighter anyway - as she is very short-sighted and claustrophobic). Ben Mantle was born in Leamington Spa and developed a very early interest in things artistic, designing programme covers for school productions and even coming first in his local library colouring-in competition. From there he went on to study animation at Surrey Institute of Art & Design, graduating in 2003. He then gained valuable experience working on Tim Burton's "Corpse Bride" before moving to Brighton to work as 'Head of Animation' in a media company, focusing on Character and Background design. He was also part of the Animation team creating the BAFTA winning 'Big and Small' CBeebies website. Since 2008, Ben has been working as a Children's Book Illustrator from his shared studio in Brighton and he also produces screen prints and digital artwork to exhibit. He illustrated 'Callum's Incredible Construction Kit' which won the Bishop's Stortford Picture Book prize 2013.