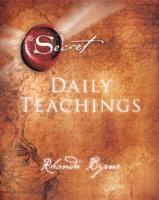 av Rhonda Byrne
(1 röst)
Inbunden Engelska, 2013-08-27
164
Köp
Spara som favorit
Finns även som
Visa alla 2 format & utgåvor
Take the next step with The Secret Daily Teachings - the much-loved companion guide for living The Secret day by day is now available in a new hardcover format. The Secret contains clear principles on how to live your life in accordance with the natural laws of the Universe, but the important thing for every person is to LIVE IT. Now, with The Secret Daily Teachings, Rhonda Byrne takes you through a year of teachings, sharing wisdom and insights for living in harmony with the laws that govern all human beings, so that you may become the master of your life. Building upon The Secret's powerful truths, your knowledge of the law of attraction is about to expand far beyond what you can imagine. More joy, more abundance, more magnificence - every single day of the year.
Visa hela texten

Rhonda Byrne is the creator behind The Secret, a documentary film that swept the world in 2006, changing millions of lives and igniting a global movement. Later that same year, Rhonda's book of The Secret was released. It has been translated into more than fifty languages and remains one of the longest-running bestsellers of all time. Rhonda has written four more bestselling books: The Power in 2010, The Magic in 2012, Hero in 2013, and The Greatest Secret in 2020.