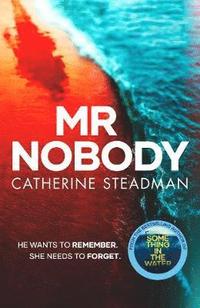 av Catherine Steadman
Inbunden Engelska, 2020-01-09
151
Köp
Spara som favorit
Finns även som
Visa alla 5 format & utgåvor
'Fans of The Silent Patient will love it' CJ TUDOR 'Very clever, brilliantly compelling' BA PARIS 'Cinematic and gripping' SARAH VAUGHAN 'Original, ingenious and utterly gripping' JP DELANEY *** Memento meets Sharp Objects in this superb thriller from the bestselling author of Something in the Water, a 2019 Richard & Judy Book Club pick *** When a man is found on a Norfolk beach, drifting in and out of consciousness, with no identification and unable to speak, interest in him is sparked immediately. From the hospital staff who find themselves inexplicably drawn to him; to international medical experts who are baffled by him; to the nationalpress who call him Mr Nobody; everyone wants answers. Who is this man? And what happened to him? Neuropsychiatrist Dr Emma Lewis is asked to assess the patient. This is her field of expertise, this is the chance she's been waiting for and this case could make her name known across the world. But therein lies the danger. Emma left this same small town in Norfolk fourteen years ago and has taken great pains to cover all traces of her past since then. But now something - or someone - is calling her back. And the more time she spends with her patient, the more alarmed she becomes. Has she walked into danger? Praise for Mr Nobody 'Original, ingenious and utterly gripping, with characters you'll really care about as they race towards the brilliantly unexpected ending' JP Delaney 'From the intriguing opening to the shocking ending, I loved it . . . Fans of The Silent Patient will love it' CJ Tudor 'Intelligent, assured and unusual, Mr Nobody had me racing through the pages . . . Cinematic and gripping' Sarah Vaughan 'Very clever, brilliantly compelling, another amazing read from Catherine Steadman' BA Paris 'An enjoyable, nail-biting ride' Observer 'A highly imaginative tale tinged with Hitchcockian tension and kinetic pacing . . . Deliciously provocative . . . Delightfully compelling' Washington Post 'Perfectly paced with an exciting race to the end, this is one clever novel' Woman's Weekly 'A gripping read' Bella 'A man washes up on a Norfolk beach with no ID and unable to speak. Christened "Mr Nobody" by the press, everyone wants to know who he is. Dr Emma Lewis is drafted in to help, but to do that, she has to face her own demons. Gripping' Crime Monthly 'A spellbinding thriller perfect for those dark and stormy nights' Kirkus Review Praise for Something in the Water 'Worthy of Hitchcock' Sunday Times 'Arresting . . . deftly paced, elegantly chilly . . . Something in the Water is a proper page-turner' The New York Times 'High-octane, heart-pounding read'Good Housekeeping 'A thriller for our times . . . Catherine Steadman is a fresh and playful new voice' Louise Candlish 'Will leave you questioning your own morality' Grazia 'The perfect beach read' Reese Witherspoon (Reese's Book Club x Hello Sunshine book pick) 'Superbly written' B A Paris 'Addictive'Sunday Express 'A fascinating moral dilemma, a fast-paced examination of the slippery slope and the precarious foundations our middle-class lives are built on' Gillian McAllister 'Thrilling and thought-provoking' Riley Sager
Visa hela texten

Catherine Steadman is an actress and writer based in North London. She is known for her roles in Downton Abbey and Tutankhamun, starring alongside Sam Neill, as well as shows including Breathless, The Inbetweeners, The Tudors, and Fresh Meat. In 2017 Catherine will feature in political thriller Fearless and new BBC comedy Bucket. She also has appeared on stage in the West End including Oppenheimer for the RSC, for which she was nominated for a 2016 Laurence Olivier Award.