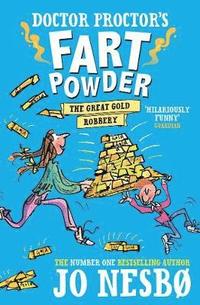 av Jo Nesbo
Häftad Engelska, 2018-08-23
99
Köp
Spara som favorit
Skickas inom 5-8 vardagar.
Fri frakt inom Sverige för privatpersoner.
Finns även som
Visa alla 1 format & utgåvor
The fourth and final laugh-out loud adventure in the Doctor Proctor's Fart Powder series from Jo Nesbo, the most successful Norwegian author of all time. When a Russian billionaire robs the Norwegian Gold Reserve and melts the last remaining gold bar into the Premier Soccer League trophy, it's up to Doctor Proctor, Nilly and Lisa to get the trophy and save Norway. But with a failed break-in attempt into the billionaire's subterranean gold-melting lab and the Norwegian Gold Reserve Inspection only three days away, the only way to retrieve the trophy is to win it back. Hoping to prevent national panic and uproar, Nilly and Lisa join the Rotten Ham soccer team and use the Fartonaut Powder, along with a handful of Doctor Proctor's other wacky inventions, to try and lead the hopeless underdog team to victory before time runs out. In the spirit of Roald Dahl and Lemony Snicket, Doctor Proctor offers a winning combination of humour, adventure, and absurdity that kids (of all ages) will love! PRAISE for the Doctor Proctor's Fart Powder series: 'This terrific book will make you laugh, and cherish your friends' - James Patterson 'plenty of toilet humour, and general silliness that kids love' - The Bookseller 'wickedly entertaining' - The Big Issue 'Lashings of silliness, quirkiness, self-deprecating humour, and a rollicking plot...' - TheBookbag.co.uk 'Fuelled by farts, this is fast-paced and a delightfully ridiculous adventure' - Julia Eccleshare review on lovereading4kids.co.uk 'A superb mix of bizarre and wacky with a little bit of off-beat thrown in. Reminiscent of Roald Dahl it has all the elements to keep children hooked...' - Waterstones
Visa hela texten

Jo Nesbo is the most successful Norwegian author of all time. He has sold more than 20 million copies of his novels wand his Doctor Proctor series has been translated into more than 35 languages. The first book in the series, Doctor Proctor's Fart Powder, sold more copies in his native Norway than any other children's debut.