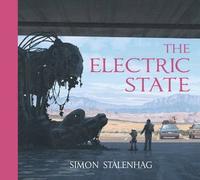 av Simon Stalenhag
Inbunden Engelska, 2018-09-06
199
Köp
Spara som favorit
Finns även som
Visa alla 2 format & utgåvor
Stranger Things meets On the Road in this hypnotic, lavishly illustrated novel. Set in a post-apocalyptic 1997, The Electric State is the story of Michelle who, accompanied by her toy robot Skip, sets out across the western United States in a stolen car to find her missing brother. Told in achingly melancholy, spare prose and featuring almost a hundred gorgeous, full-colour illustrations, The Electric State is a novel like no other. Rights in The Electric State have already sold in thirteen territories and Deadline reports that the film rights were snapped up by the Russo Brothers' production company (Captain America: The Winter Soldier and Captain America: Civil War) with Andy Muschietti (Mama, It) attached to direct.
Visa hela texten

Simon Stalenhag (b. 1984) is the internationally acclaimed author, concept designer and artist behind Tales from the Loop and Things from the Flood. His highly imaginative images and stories depicting illusive sci-fi phenomena in mundane, hyper-realistic Scandinavian and American landscapes have made Stalenhag one of the most sought-after visual storytellers in the world. Tales from the Loop was ranked one of the "10 Best Dystopias" by The Guardian, along with such works as Franz Kafka's The Trial and Andrew Niccol's Gattaca.