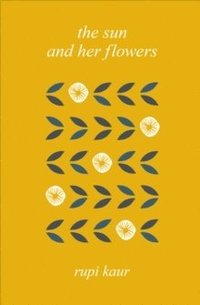 The Sun and Her Flowers

av Rupi Kaur
Inbunden Engelska, 2018-10-23
162
Köp
Spara som favorit
Finns i lager! Skickas inom 1-2 vardagar.
Gratis frakt inom Sverige över 159 kr för privatpersoner.
Finns även som
Visa alla 4 format & utgåvor
A revised hardcover edition of the #1 New York Times bestseller the sun and her flowers by Rupi Kaur, author the #1 New York Times bestseller milk and honey. Her long-awaited second collection of poetry is a vibrant and transcendent journey about growth and healing. Ancestry and honouring one's roots. Expatriation and rising up to find a home within yourself. Divided into five chapters and illustrated by Kaur, the sun and her flowers is a journey of wilting, falling, rooting, rising, and blooming. A celebration of love in all its forms. this is the recipe of life said my mother as she held me in her arms as i wept think of those flowers you plant in the garden each year they will teach you that people too must wilt fall root rise in order to bloom
Visa hela texten

"Rupi Kaur's The Sun and Her Flowers is everything her fans have been waiting for. . . . [She's] perhaps the best-known poet in the English-speaking world at this point." * Bustle * "Rupi Kaur is kicking down the doors of publishing." * The New York Times (Style) * "The poet who touched a nerve." * The Times (London) * "Her work is human experience, tidily aestheticized and monetized, rendered inspirational and relatable in perfect balance." * The Cut * "At once simple, current and hard-hitting." * The Guardian (London) * "One of the most popular writers in the world, full stop." * The Globe and Mail * "The line drawings that accompany her poems are raw, evocative and utterly striking." * Toronto Star * "Rupi Kaur reinvents poetry." * The Economist * "Rupi Kaur sits atop a new wave in poetry." * The Wall Street Journal * "At age 24, Rupi Kaur has been called the voice of her generation (move over, Lena Dunham)." * USA Today * "There's no denying that Rupi Kaur is currently one of the most - if not the most - popular poets in America." * Boston Globe * "Rupi Kaur is a rock star." * Kansas City Star *

rupi kaur is a poet. artist. and performer. as a 21-year-old university student rupi wrote. illustrated. and self-published her first poetry collection milk and honey. next came its artistic sibling the sun and her flowers. these collections have sold over 8 million copies and have been translated into over 40 languages. home body is her third collection of poetry. rupi's work touches on love. loss. trauma. healing. femininity. and migration. she feels most at home when creating art or performing her poetry onstage.