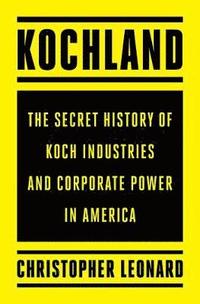 av Christopher Leonard
Häftad Engelska, 2019-08-13
189
Köp
Spara som favorit
Skickas inom 5-8 vardagar.
Fri frakt inom Sverige för privatpersoner.
Finns även som
Visa alla 5 format & utgåvor
Shortlisted for the 2019 Financial Times & McKinsey Business Book of the Year. The extraordinary account of how the secretive Koch Industries became one of the largest private companies in the world. Koch Industries, the sprawling industrial conglomerate owned by Charles and David Koch, specializes in the kinds of stunningly profitable businesses that undergird every aspect of modern life: it controls the nitrogen fertilizer that puts food on your table, the fibres in your clothes, the building materials that make your homes and offices, and the microchips that drive your life online. For five decades, CEO Charles Koch has kept Koch Industries quietly operating in deepest secrecy, with a view towards very, very long-term profits. He's a brilliant businessman: patient with earnings, able to learn from his mistakes, determined that his employees develop a reverence for free-market ruthlessness, and a master disruptor. Seven years in the making, Kochland tells the ambitious tale of how one private company consolidated power over half a century - and, in doing so, helped transform capitalism into something that feels deeply alienating to many Americans today.
Visa hela texten

'If you want a crash course in the evolution of postmodern capitalism over the last five decades read Kochland....Leonard's study is exhaustive and engaging.' * New York Journal of Books * 'This page-turning expose reveals the full extent of the Koch brothers' influence on American capitalism.' * Book Riot * 'Leonard's intricately developed and extensively researched history of the Koch empire is a colossal corporate biography that sheds important light on this closely guarded enterprise while simultaneously scrutinizing the nefarious underpinnings of American economic policies and practices.' * Booklist * 'Leonard's superb investigations and even-handed, clear-eyed reportage stand out....American capitalism at its most successful and domineering is at the center of this sweeping history of a much-vilified company.' * Publishers Weekly * 'A landmark book....A massively reported deep dive into the unparalleled corporate industrial giant Koch Industries....This impressively researched and well-rendered book also serves as a biography of Charles Koch, with Leonard providing an evenhanded treatment of the tycoon. Leonard's work is on par with Steve Coll's Private Empire and even Ida Tarbell's enduring classic The History of the Standard Oil Company.' * Kirkus Reviews * 'Christopher Leonard has produced an investigative feat: a hugely readable, entirely original, magisterial work on one of the most important subjects of our time - the weirdly cultish, terrifyingly successful empire built all-but invisibly by the billionaire sphinx Charles Koch.' -- Steve LeVine, author of The Oil and the Glory 'Christopher Leonard's Kochland is the kind of book that doesn't come along that often - a mind-blowing feat of reporting about a highly secretive organisation. What's even more amazing is that it seems destined to further convince both sides about the righteousness of their point of view. Those who believe in unfettered free-market capitalism will find much to feast on, while those concerned with the corrosive effects of growth at all costs will find more than enough to gorge on as well. And if the one side will see promise while the other sees peril, both should be able to agree on what this story is really about, which is power - and a terrifying amount of it at that.' -- Duff McDonald, New York Times bestselling author of The Firm 'Christopher Leonard's visionary, decade-spanning, and heart-rending investigation into the Koch Empire is indispensable not just for understanding the rise of corporate power in America, but for understanding America itself. Leonard's book will take its place alongside Chernow's Titan and Coll's Private Empire as one of the great accounts of American capitalism.' -- Jesse Eisinger, author of The Chickenshit Club 'Kochland is a dazzling feat of investigative reporting and epic narrative writing, a tour de force that takes the reader deep inside the rise of a vastly powerful family corporation that has come to influence American workers, markets, elections and the very ideas debated in our public square. Leonard's work is fair and meticulous, even as it reveals the Kochs as industrial Citizens Kane of our time.' -- Steve Coll, Pulitzer Prize-winning author of Private Empire

Christopher Leonard is a business reporter whose work has appeared in The Washington Post, The Wall Street Journal, Fortune, and Bloomberg Businessweek. He is the critically acclaimed author of the New York Times bestseller Kochland, which won the J. Anthony Lukas Work-in-Progress Award, and The Meat Racket.