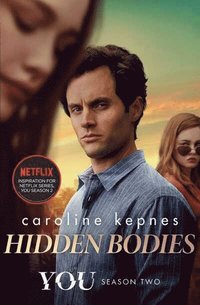 The sequel to Netflix smash hit YOU

av Caroline Kepnes
(1 röst)  |  Läs 1 recension
Häftad Engelska, 2019-12-17
99
Köp
Spara som favorit
Finns i lager! Skickas inom 1-3 vardagar.
Fri frakt inom Sverige över 159 kr för privatpersoner.
Kan levereras innan jul!
Finns även som
Visa alla 1 format & utgåvor
We all binged on YOU when it became a major hit Netflix series last Christmas. ***Now the major Netflix series is back for SERIES TWO, based on the even more twisted HIDDEN BODIES*** JOE GOLDBERG IS BACK . . . Joe came to Los Angeles to start over, to forget about what happened in New York. But in a darkened room in Soho House everything suddenly changed. She is like no one he's ever met before. She doesn't know about his past and never can. The problem is, hidden bodies don't always stay that way. Praise for You: 'THRILLER OF THE YEAR' Daily Mail 'I am RIVETED, AGHAST, AROUSED you name it. The rare instance when prose and plot are equally delicious' Lena Dunham 'Hypnotic and scary' Stephen King 'Brilliant thriller with attitude, guts and true insight into the nature of obsession' Sophie Hannah 'A fantastically creepy thriller.... The kind of book you put your life on hold for' Glamour 'Clever and chilling' Elle 'A brilliant tale ... It's Gone Girl meets a sinister version of Girls' Marie Claire 'An addictive thriller!' Closer
Visa hela texten

Caroline Kepnes is the author of You, Hidden Bodies, Providence, and numerous short stories. Her work has been translated into a multitude of languages and inspired a television series adaptation of You, currently on Netflix. Kepnes graduated from Brown University and previously worked as a pop culture journalist for Entertainment Weekly and a TV writer for 7th Heaven and The Secret Life of the American Teenager. She grew up on Cape Cod, Massachusetts, and now lives in Los Angeles.