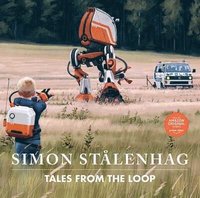 Tales from the Loop

av Simon Stalenhag
Inbunden Engelska, 2020-04-09
350
Köp
Spara som favorit
Finns även som
Visa alla 2 format & utgåvor
'Remarkable... beautiful' - National Public Radio These are the tales of an extraordinary journey: from the small towns of Sweden to the deserts of Nevada to the bitter chill of Siberia. A journey where children make friends with abandoned robots... in a world where dinosaurs roam freely. These are the Tales from the Loop. Stories told in both words and haunting illustrations, TALES FROM THE LOOP captures a not-too-distant reality that is both haunting and imminent: addressing the many ways developing technology and nature can create havoc and wonder in our world... and the hope we might still find in that future. Perfect for fans of everything from STRANGER THINGS to JURASSIC PARK to JUMANJI, Tales from the Loop is an incredible, unmissable work of genius. PRAISE for SIMON STALENHAG'Tales has the magic. It's got the robots, the weirdness, the dinosaurs. But most of all, it has the wonder. No one who picks this book up will be the same person when they put it down again' NPR on Tales from the Loop 'No words to describe this novel in pictures. Stahlenhag defined a whole new aesthetic for scifi in the 21st century' Damien Walter on The Electric State 'A chilling, unforgettable visual and narrative experience' Locus on The Electric State Stalenhag's 'stories crawl into my brain and mess with my memory of history, time and place' NPR on The Electric State
Visa hela texten

Simon Stalenhag (b. 1984) is the internationally acclaimed author, concept designer and artist behind Tales from the Loop and Things from the Flood. His highly imaginative images and stories depicting illusive sci-fi phenomena in mundane, hyper-realistic Scandinavian and American landscapes have made Stalenhag one of the most sought-after visual storytellers in the world. Tales from the Loop was ranked one of the "10 Best Dystopias" by The Guardian, along with such works as Franz Kafka's The Trial and Andrew Niccol's Gattaca.