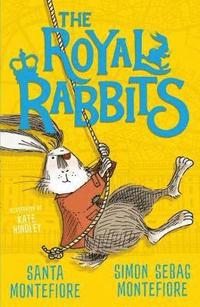 av Santa Montefiore, Simon Sebag Montefiore
Häftad Engelska, 2020-08-06
97
Köp
Spara som favorit
Kan levereras innan julafton!
Finns även som
Visa alla 1 format & utgåvor
The adventure begins for brave little Shylo and his Royal Rabbit friends in this charming series from bestselling authors Santa Montefiore and Simon Sebag Montefiore and illustrator Kate Hindley, that proves even the smallest rabbit can be the biggest hero. Life is an adventure. Anything in the world is possible - by will and by luck, with a moist carrot, a wet noise and a slice of mad courage! Shylo has always been the runt of the litter, the weakest and quietest of all of his family. His siblings spend their days making fun of him for not being like the rest of them. But when Shylo stumbles across a band of ratzis and overhears their evil plan to take a photo of the Queen in her nightie, it's up to this unlikely hero to travel to London and inform the Royal Rabbits of London about the diabolical plot! The Royal Rabbits have a proud history of protecting the royal family and now the secret society need to leap into action to stop the ratzis... But can a rabbit as feeble and shy as Shylo convince them that Queen is in danger? Praise for The Royal Rabbits: 'Packed with fun, fantasy and the sort of adventure guaranteed to have sticky little fingers hungrily turning the pages' The Mail on Sunday 'The Royal Rabbits is sweet, funny and beautifully illustrated' The Times
Visa hela texten

Born in England in 1970, Santa Montefiore grew up in Hampshire. She is married to writer Simon Sebag Montefiore. They live with their two children, Lily and Sasha, in London. Visit her at www.santamontefiore.co.uk. Simon Sebag Montefiore's bestselling and prize-winning books are now published in over forty-five languages and he has won prizes for both his histories and his novels. In non-fiction, he is the author of The Romanovs: 1613-1918, Catherine the Great & Potemkin, Young Stalin, Stalin: the Court of the Red Tsar, and Jerusalem: the Biography. He is also the author of the Moscow Trilogy of novels Sashenka, Red Sky at Noon and One Night in Winter which won the Best Political Novel of the Year Prize and was longlisted for the Orwell Prize. With his wife Santa Montefiore, he is the author of the children's Royal Rabbits of London series. Follow Simon on Twitter at @SimonMontefiore. For more information visit SimonSebagMontefiore.com. Kate Hindley is the much-loved illustrator of both picture books (including the award-winning You Must Bring a Hat, written by Simon Philip) and fiction (The Royal Rabbits of London, written by Santa Montefiore & Simon Sebag Montefiore), as well as the author-illustrator of new board book series, Treacle Street. She lives in Bristol.