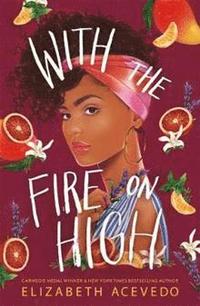 With the Fire on High

From the winner of the CILIP Carnegie Medal 2019

av Elizabeth Acevedo
Häftad Engelska, 2019-09-19
Unga vuxna
99
Köp
Spara som favorit
Skickas inom 5-8 vardagar.
Gratis frakt inom Sverige över 159 kr för privatpersoner.
Finns även som
Visa alla 1 format & utgåvor
'A delicious, evocative story' THE GUARDIAN From the author of THE POET X comes a sumptuous prose novel, perfect for fans of Angie Thomas' On the Come Up, Justin Reynolds' Opposite of Always and Nicola Yoon Ever since she got pregnant, seventeen-year-old Emoni's life has been about making the tough decisions - doing what has to be done for her young daughter and her grandmother. Keeping her head down at school, trying not to get caught up with new boy Malachi. The one place she can let everything go is in the kitchen, where she has magical hands - whipping up extraordinary food beloved by everyone. Emoni wants to be a chef more than anything, but she knows it's pointless to pursue the impossible. There are rules she has to play by. And yet, once she starts cooking, and gets that fire on high, she sees that her drive to feed will feed her soul and dreams too. And anything is possible. 'With its judicious depth and brilliant blazes of writing that simmer, then nourish, With the Fire on High is literary soul food' New York Times
Visa hela texten

With The Fire On High was everything I was expecting from Elizabeth Acevedo, she is now one of my favourite authors. I read Acevedo's debut The Poet X last year and it's brilliance was mind blowing. With The Fire On High is another exceptional book by this author. This book follows Emoni Santiago, a young, single mother still in high school and living with her Abuela. Emoni's life has never been simple, her mother died in childbirth and her father walked out soon after, she fell pregnant at fourteen and has since been raising her daughter alone with her Abuela. One of Emoni's only passions in life is cooking so when a culinary arts elective is added as an option in her senior year, she thinks her dreams are finally coming true. But this class isn't the walk in the park she was expecting. It will challenge not only her cooking, but her determination, perseverance and leadership skills. I loved the magical element to this novel, how Emoni's dishes brought up bittersweet or loving memories to their recipients, it added a whimsical feel to the story. The recipes at the beginning of each part was a lovely addition to the book as well. Acevedo discusses difficult and varying topics such as race, teen pregnancy, single parenthood, relationships, family and poverty. The writing is so smooth and easy to read, I find Acevedo's writing to be so soothing. I would urge everyone to read this glorious book. * Library Looter * Though she is still a high-school student, Emoni has a two-year-old daughter, for whom she wants nothing but the best. When it comes to her own prospects, she is less focused - but then she's offered the chance to join a cooking class taught by a gifted chef, to develop her own subtle palate and powerful gift. A delicious, evocative story from this year's Carnegie winner. * The Guardian * Her second book, With the Fire on High (Hot Key), is another coming-of-age triumph, written this time in lyrical prose. High-school senior Emoni is mother to a toddler, struggling to balance school, family and her dream of becoming a chef. A resonant and nuanced portrayal of a young woman forging her own identity, enriched by complex female relationships and delectable descriptions of food. -- Fiona Noble * The Guardian * This book is like a recipe in itself - with a pinch of magical realism, a hint of romance, a spoonful of sassiness and a heap of hardship, you get a whole lot of book that you'll want to read again and again. * Serendipity Reviews * 'With The Fire On High is extraordinary, compelling and just straight-up beautiful. It's impacting and moving. I was so involved in every aspect of Emoni's life that closing this book was like saying goodbye to a friend.' -- Carla Bastos * Waterstones * Everything about this book spoke to me: As a reader, a dreamer, a woman and a human * A Little but a Lot * Acevedo's book burns with determination. * I newspaper * I thought Emoni was a brilliant character, I loved the descriptions of her cooking, her relationships with her daughter's father, her abuela, her best friend, the new love interest. One of my favourite aspects of the book was also her relationship with her father who moved away and keeping up with that relationship which really touched on some of my own personal experiences. I think I'll always pick up new books by Acevedo. * Fluttering Butterflies * I could identify at least four 'problems' that would need solving by the end of the book. Elizabeth surprised me, again, by taking the story somewhere a bit different, and the plot did its own thing, and it was exactly right. Emoni is a first rate role model for young girls, having learned the hard way to stand up for herself. * Book Witch *

Elizabeth Acevedo is the New York Times bestselling and 2019 Carnegie Medal winning author of THE POET X. She is also the winner of the 2018 National Book Award for Young People's Literature, The Printz Award for Excellence in Young Adult Fiction, the Boston Globe-Hornbook Award Prize for Best Children's Fiction and the Pura Belpre Award for a work that best affirms the Latinx cultural experience. She holds a BA in Performing Arts from The George Washington University and an MFA in Creative Writing from the University of Maryland. Acevedo has been a fellow of Cave Canem, Cantomundo, and a participant in the Callaloo Writer's Workshops. She is a National Poetry Slam Champion and resides in Washington, DC with her partner.