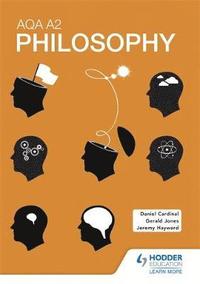 This book is essential when teaching the new A2 philosophy spec and contains a variety of activities to engage students thinking. It is much clearer and detailed than the official textbook and provides students with a valuable resource for the entirety of the course. -- Rachel Jowett * Abigail Lambert *

Gerald Jones is Head of Humanities at the Mary Ward Centre, a DfES beacon college in central London. Gerald has also lectured in philosophy and critical thinking since 1990, and at the Institute of Education since 1996. He has a particular interest in the subtler and more nebulous skills and processes of adult education - and in harnessing tutor power through teacher-led think tanks. He has developed a games-based approach to teaching philosophy that has made it accessible to a wider range of learners, from the under-8s to the over-80s. He has published several books including Exploring Ethics, Gatekeepers, Midwives and Fellow Travellers and a series of six philosophy books for Hodder. He is currently on sabbatical, with his family, in Sydney, Australia.