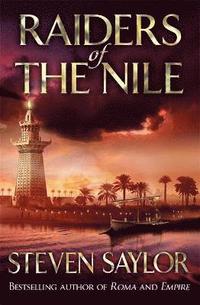 Raiders Of The Nile

av Steven Saylor
(3 röster)  |  Läs 1 recension
Häftad Engelska, 2015-04-02
229
Köp
Spara som favorit
Skickas inom 7-10 vardagar.
Fri frakt inom Sverige för privatpersoner.
Beställ boken senast måndag 7 december för leverans innan julafton
Finns även som
Visa alla 2 format & utgåvor
Gordianus is now twenty-two years old and living in Alexandria with Bethesda, scraping by in modest and haphazard fashion. But then Bethesda is kidnapped by mistake. With few resources available to him, Gordianus has to find the people who kidnapped her and get her back - before they realise they have the wrong woman and dispose of her for good. A raid on the golden tomb of Alexander the Great, a semi-shady troupe of travelling performers, highwaymen, amorous innkeepers, the politics of the pharaohs, smugglers, camels and an adventure up the Nile all combine to make this a rescue mission neither Gordianus - or Bethesda - will ever forget. Praise for Steven Saylor: 'The Saylor hallmarks are meticulous recreation of Rome's grimy bustling streets and a brilliantly drawn cast of minor characters.' The Sunday Times 'A compelling storyteller, with a striking talent for historical reconstruction.' Times Literary Supplement
Visa hela texten

Steven Saylor is the author of the internationally bestselling historical novels Roma and Empire (which precede Dominus), as well as the acclaimed Roma Sub Rosa series of historical mystery novels featuring Gordianus the Finder, beginning with Roman Blood. His fascination with the ancient world began in childhood when he saw the 1963 movie Cleopatra at a drive-in theater, and continued through his education in history and Classics at the University of Texas as Austin. His first trip to Rome was a life-changing event that propelled him into his 30-year career as a historical novelist. His work has been translated into more than 20 languages, and book tours have taken to many countries, including the U.K. He has appeared on the History channel as an expert on Roman politics and daily life. With Rick Solomon, his husband of 45 years, he divides his time between Berkeley, California and Austin, Texas.