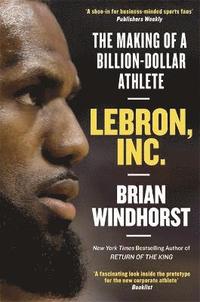 The Making of a Billion-Dollar Athlete

av Brian Windhorst
Inbunden Engelska, 2019-08-01
219
Köp
Spara som favorit
Finns även som
Visa alla 4 format & utgåvor
From the New York Times bestselling author of Return of the King comes the story of LeBron James's incredible transformation from basketball star to sports and business mogul. With eight straight trips to the NBA Finals, LeBron James has proven himself one of the greatest basketball players of all time. And like Magic Johnson and Michael Jordan before him, LeBron has also become a global brand and businessman who has altered the way professional athletes think about their value, maximize their leverage, and use their voice. LeBron, Inc. tells the story of James's journey down the path to becoming a billionaire sports icon - his successes, his failures, and the lessons both have taught him along the way. With plenty of newsmaking tidbits about his rollercoaster last season in Cleveland and high-profile move to the Lakers, LeBron, Inc. shows how James has changed the way most elite athletes manage their careers, and how he launched a movement among his peers that may last decades beyond his playing days.
Visa hela texten

Windhorst knows himself some LeBron, as he demonstrates here in detailing how a basketball player transformed himself into a shrewd entrepreneur worth well over a billion dollars . . . A fascinating look inside the prototype for the new corporate athlete * Booklist * This is a shoo-in for business-minded sports fans * Publishers Weekly *

Brian Windhorst has covered the NBA for ESPN since 2010. He began covering LeBron James in 1999 and was the daily beat writer on the Cleveland Cavaliers for the Akron Beacon Journal and Cleveland Plain Dealer from 2003 to 2010. He is also the co-author of three books, including the New York Times bestseller Return of the King, The Franchise, and The Making of an MVP.