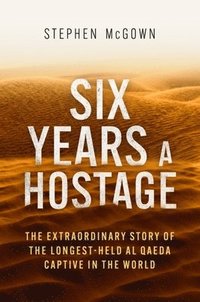 Captured by Islamist Militants in the Desert

av Stephen McGown
Häftad Engelska, 2023-02-16
139
Bevaka
Spara som favorit
Ännu ej utkommen – klicka "Bevaka" för att få ett mejl så fort boken boken går att köpa.
Finns även som
Visa alla 2 format & utgåvor
THE EXTRAORDINARY STORY OF THE LONGEST-HELD AL QAEDA CAPTIVE IN THE WORLD Stephen McGown was en route from London to South Africa, on a once-in-a-lifetime trip by motorbike, returning home to Johannesburg. He had reached Timbuktu, in Mali, when he was captured, along with a Dutch and a Swedish national, by Al Qaeda Islamist militants. Steve was taken because he held a British passport. He was subsequently held hostage at various camps in the Sahara Desert in the north-west of Africa for nearly six years before eventually being released. Life as Steve had known it changed in that instant that he was taken at gunpoint. He had nothing to bargain with, and everything to lose. For the next six years, he reluctantly engaged in what he came to call the greatest chess game of his life. Thousands of kilometres to the south, in Johannesburg, the shock of Stephen's capture struck the McGown family and his wife, Cath, with whom he had, until recently, been living in London. They immediately began efforts to secure Steve's release, through diplomatic channels and in every other way they felt might have a chance of seeing Stephen freed. But as the months of captivity became years, Steve was compelled to go to extraordinary lengths to survive. Making it back home alive became his sole aim. To accomplish this, he realised that he would have to do everything he could to raise his status in the eyes of his captors. To this end, he taught himself Arabic and French, and also converted to Islam, accepting a new name, Lot. To this day, Steve retains the unenviable record of being the longest-held, surviving prisoner of Al Qaeda. While he was undoubtedly always Al Qaeda's captive, through the long years he spent in intimate proximity to his captors, Steve got to see the Islamist militants as few other Westerners have ever seen them. Six Years a Hostage is not only a remarkable story of mental strength, physical endurance and the resilience of the human spirit, but also, significantly, a unique and nuanced perspective on one of the world's most feared terrorist groups. Steve did not merely survive his terrible ordeal; he emerged from the desert a changed - stronger, more positive - human being. This is Stephen McGown's remarkable story, as told to Tudor Caradoc-Davies, a freelance writer, editor and author based in Cape Town, South Africa. After seven years spent working for glossy magazines such as Men's Health, GQ, Best Life and Women's Health, he now contributes to a range of publications. He also writes for the (South African) Sunday Times, and Red Bulletin.
Visa hela texten

Provides a compelling look at McGown's strength, fortitude and adaptability along with his instincts that guided his survival during his six-year ordeal. -- Vanessa Banton * news24 * McGown's struggle includes expanding his vast capacity for forgiveness . . . His exceptional conquest is renouncing implacable enmity and embracing the most exemplary in human nature. This is the Saharan Oasis he brought home. -- Mahmood Sanglay * Muslim Views * It was the first kidnapping in Timbuktu, in Mali . . . I had my passport in my pocket and I didn't realise. When I realised, it literally felt like the world was coming down around me. I went icy cold and numb. -- Stephen McGown, interviewed on CapeTalk A book so unlike any other that it keeps you awake at night with a head full of "what ifs" and "if onlys" . . . an excellent read, part adventure story, part psychological drama. -- Lesley Stones Not just an incredible story of mental strength, physical endurance and the resilience of the human spirit, but also a unique, nuanced perspective on one of the world's most feared terrorist organisations. Not only did Steve survive his ordeal, but in many respects he came out of the desert both a changed man and a stronger, more positive human. * Goodreads *

STEPHEN McGOWN worked as an investment banker in Johannesburg, South Africa, before spending seven years doing similar work in London. While in London, he met his wife, Cath, who shared his desire to return to South Africa to manage his family's farming business and start a family. It was his life on a farm that had inspired Steve's passion for the outdoors and his desire for adventure: in this case, to ride his motorbike from London down Africa back to Johannesburg. But he was abducted in Timbuktu, along with a Dutch and a Swedish national, by Islamist militants of Al Qaeda and held as a hostage, due to his British passport, in many different locations in the Sahara Desert in north-west Africa for nearly six years.