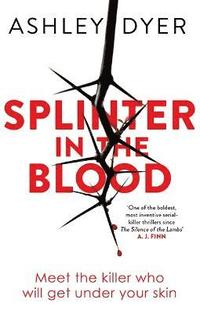 Splinter in the Blood

av Ashley Dyer
Häftad Engelska, 2019-02-07
229
Köp
Spara som favorit
Skickas inom 10-15 vardagar.
Fri frakt inom Sverige för privatpersoner.
Kan levereras innan jul!
Finns även som
Visa alla 4 format & utgåvor
'Compelling, clever. Packed with macabre and fascinating forensic details. A stunning debut' Mo Hayder After months of hunting a ruthless murderer that the press has dubbed the Thorn Killer, Detective Carver is shot in his own home. His trusted partner, Ruth Lake, is alone with him. Yet instead of calling for help, she wipes the room clean of prints. But Carver isn't dead. Awakening in hospital, he has no memory of being shot, but is certain that his assailant is the Thorn Killer. Though there's no evidence to support his claim, Carver insists the attack is an attempt to scare him off the psychopath's scent. One person knows the truth and she's not talking. She's also now leading the Thorn Killer investigation while Carver recuperates. But Ruth is keeping a deadly secret, and she'll cross every line - sacrificing her colleagues, her career, and maybe even her own life - to keep it from surfacing. 'A taut and compelling thriller, as sharp as the thorns that feature in the plot' Ann Cleeves
Visa hela texten

Enthralling . . . The skillfully constructed plot complements the intriguing characters, including a deliciously creepy killer who lurks in the background. Dyer is definitely a crime writer to watch. * Publishers Weekly, starred review * One of the boldest, most inventive serial-killer thrillers since The Silence of the Lambs. Packed with forensic detail, anchored by a protagonist as complicated as she is compelling, this ferocious novel is perfect for fans of Jeffery Deaver and Chris Carter * AJ Finn * The novel is packed with police and forensic detail because its author is a pseudonym for two women with impressive pedigrees in both: Margaret Murphy was chair of the Crime Writers' Association and Helen Pepper was a forensic scientist who now lectures on policing. They make a formidable combination. * Daily Mail * Compelling, clever. Packed with macabre and fascinating forensic details. A stunning debut. * Mo Hayder * Ashley Dyer pulls off a masterclass . . . There is a rich history to these characters' lives and relationships that we catch glimpses of, but with enough held back to keep us guessing. Splinter in the Blood is a book you can pick up in the knowledge that you will be told a good story by a writer at the top of her game. * Sheffield Telegraph, Read of the Fortnight * A taut and compelling thriller, as sharp as the thorns that feature in the plot. * Ann Cleeves *

Ashley Dyer is the pseudonym for novelist Margaret Murphy working in consultation with policing and forensics expert, Helen Pepper. Margaret Murphy is a Writing Fellow and Reading Round Lector for the Royal Literary Fund, a past Chair of the Crime Writers Association (CWA), and founder of Murder Squad. A CWA Short Story Dagger winner, she has been shortlisted for the First Blood critics' award for crime fiction as well as the CWA Dagger in the Library. She has written novels under her own name, and as A.D. Garrett. Helen Pepper is a Senior Lecturer in Policing. She has been an analyst, Forensic Scientist, Scene of Crime Officer, CSI, and Crime Scene Manager, and has co-authored, as well as contributed to, professional policing texts. Her expertise is in great demand with crime writers: she is a judge for the CWA's Non-Fiction Dagger award, and is Forensic Consultant on both the Vera and Shetland television series. Twitter: @AshleyDyer2017 Website: Ashley-Dyer.com