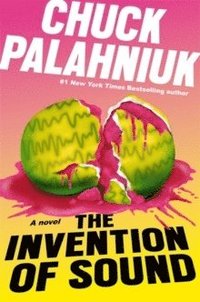 The Invention of Sound

av Chuck Palahniuk
Häftad Engelska, 2020-09-03
181
Köp
Spara som favorit
Finns även som
Visa alla 5 format & utgåvor
Chuck Palahniuk returns with the chilling tale, in classic Palahniuk tradition, of a father in search of his daughter, a young woman with a secret, and a malicious recording that can make "the whole world scream at the exact same time." Private detective Foster Gates is a father is in search of his missing daughter, and sound engineer Mitzi harbors a secret that may help him solve the case. It's Mitzi's job to create the dubbed screams used in horror films and action movies. She's the best at what she does. But what no one in Hollywood knows is the screams Mitzi produces are harvested from the real, horror-filled, blood-chilling screams of people in their death throes--a technique first employed by Mitzi's father and one she continues on in his memory--a deeply conflicted serial killer compelled beyond her understanding to honor her father's chilling legacy. Soon Foster finds himself on Mitzi's trail. And in pursuit of her dark art, Mitzi realizes she's created the perfect scream, one that compels anyone who hears it to mirror the sound as long as they listen to it--a highly contagious seismic event with the potential to bring the country to its knees.
Visa hela texten

Dark riffing on modernity is the reason people read Palahniuk. His books are not so much novels as jagged fables, cautionary tales about the creeping peril represented by almost everything. * Time * Like Edgar Allen Poe, Palahniuk is a bracingly toxic purveyor of dread and mounting horror. He makes nihilism fun * Vanity Fair * One of the most feverish imaginations in American letter * The Washington Post * Chuck Palahniuk's stories don't unfold. They hurtle headlong, changing lanes in threes and banging off the guard rails of modern fiction... With his love of contemporary fairytales that are gritty and dirty rather than pretty, Palahniuk is the likeliest inheritor of Vonnegut's place in American writing * San Francisco Chronicle *

Chuck Palahniuk has been a nationally bestselling author since his first novel, 1996's Fight Club, was made into the acclaimed David Fincher film of the same name. Palahniuk's work has sold millions of copies worldwide. He lives outside Portland, Oregon.