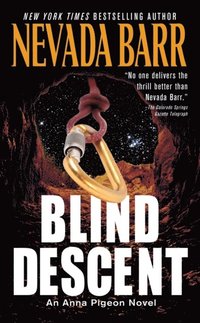 A gripping and suspenseful crime thriller

av Nevada Barr
E-bok (EPUB - DRM), Engelska, 2013-05-09
21
Den här boken kan endast laddas ned av privatpersoner.
Ladda ned
Spara som favorit
Laddas ned direkt
Läs i vår app för iPhone, iPad och Android
During a rescue attempt, Anna Pigeon learns who she can trust... Blind Descent is the sixth instalment in Nevada Barr's spellbinding crime series featuring park ranger heroine Anna Pigeon. Perfect for fans of Paul Doiron and Janet Evanovich.'Barr's description of this Stygian underworld - so beautiful, so mysterious and so treacherous - have a stunning visceral quality, largely because of her heroine's affinity with the natural world' - New York Times Book Review Lechuguilla Cavern is a man-eating cave discovered in New Mexico's Carlsbad Caverns National Park in the mid-1980s. Estimated to extend for more than three hundred miles, only ninety of them mapped, the cave was formed by acid burning away the limestone; corridors, pits, cramped wormholes, cliffs, and splendid rooms the size of football fields tangle together in a maze shrouded in the utter darkness of the underground.When a fellow ranger is injured in a caving accident, Anna swallows her paralyzing fear of small spaces and descends into Lechuguilla to help a friend in need. Worse than the claustrophobia that haunts her are the signs - some natural and some, more ominously, manmade - that not everyone is destined to emerge from this wondrous living tomb. The terrain is alien and hostile; the greed and destructive powers of mankind all too familiar. In this place of internal terrors, Anna must learn who it is she can trust and, in the end, decide who is to live and who is to die. What readers are saying about Blind Descent: 'It's a great pleasure to sit down with each book in this series''Readers will feel, see, smell, and touch every step that Nevada Barr makes in her underground trek as if they are part of the rescue party''A great mystery; very atmospheric'
Visa hela texten

Nevada Barr is an award-winning novelist and New York Times bestselling author. She began her career as an actress, during which time she became interested in the environmental movement and started working in the National Parks during the summers - Isle Royale in Michigan, Guadalupe Mountains in Texas, Mesa Verde in Colorado, and then on the Natchez Trace Parkway in Mississippi. Her first novel, Track of the Cat, introduced her legion of fans to park ranger Anna Pigeon and she now has a growing number of Anna Pigeon mysteries to her credit as well as numerous other books, short stories and articles. She currently resides in New Orleans with her husband, four magical cats, and two adorable dogs