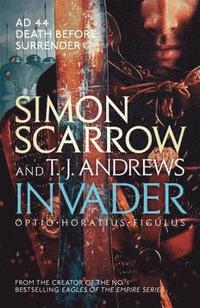 av Simon Scarrow, T J Andrews
Häftad Engelska, 2016-10-06
229
Köp
Spara som favorit
Skickas inom 7-10 vardagar.
Fri frakt inom Sverige för privatpersoner.
Finns även som
Visa alla 2 format & utgåvor
INVADER is a Sunday Times bestseller from Simon Scarrow (author of the bestsellers BRITANNIA and CENTURION) and T. J. Andrews, co-author of the bestselling INVADER. Featuring the Roman army officer Figulus in first-century Britannia, INVADER is not to be missed by readers of Conn Iggulden and Bernard Cornwell. Roman Britain, AD 44. The land is far from tamed. A puppet king is doing little to calm the hatred of the native tribes. Fighting is in Optio Horatius Figulus' blood. His Celtic ancestry gives him the toughness essential for survival. That toughness will be tested to the very limit when he is sent on a mission deep in hostile territory. And Figulus knows that, even utterly crushed in battle, their warriors routed and the Druids driven from their hill forts, the tribesmen of Britannia will sooner die than surrender. Figulus fought alongside Macro and Cato in Simon Scarrow's bestselling Eagles of the Empire series. In INVADER, he stands alone. INVADER has previously been published in five separate ebook novellas.
Visa hela texten

I really don't need this kind of competition... It's a great read - Bernard Cornwell Blends together historical facts and characters to create a book that simply cannot be put down... Highly recommended - Historical Novels Review A fast-moving and exceptionally well-paced historical thriller - BBC History Magazine Scarrow's rank with the best - Independent Lively, absorbing novel... will not disappoint - Sunday Times

Simon Scarrow is a Sunday Times No. 1 bestselling author. His bestsellers include his novels featuring Roman soldiers Macro and Cato, such as BROTHERS IN BLOOD, PRAETORIAN and THE GLADIATOR, as well as SWORD AND SCIMITAR, about the 1565 Siege of Malta, and four novels about the lives of the Duke of Wellington and Napoleon Bonaparte. He is the author with T. J. Andrews of the Sunday Times bestselling ARENA. Find out much more at Facebook/officialSimonScarrow and Twitter @SimonScarrow. T. J. Andrews was born near Barking Abbey and grew up in Essex, not far from the Ancient Roman garrison at Colchester. After several years in publishing he became a full-time writer. He lives in St Albans.