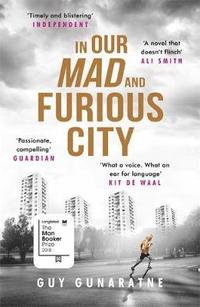 In Our Mad and Furious City

av Guy Gunaratne
Häftad Engelska, 2019-02-07
128
Köp
Spara som favorit
Finns även som
Visa alla 1 format & utgåvor
*WINNER OF THE JHALAK PRIZE, THE INTERNATIONAL DYLAN THOMAS PRIZE AND THE AUTHORS' CLUB BEST FIRST NOVEL AWARD* *LONGLISTED FOR THE MAN BOOKER PRIZE* *SHORTLISTED FOR THE GOLDSMITHS PRIZE AND THE GORDON BURN* 'I was gripped... remarkable' Robert Macfarlane, Guardian Books of the Year 'A novel that doesn't flinch, and demands change right now' Ali Smith 'A novel so of this moment that you don't even realize you've waited your whole life for it' Marlon James For Selvon, Ardan and Yusuf, growing up under the towers of Stones Estate, summer means what it does anywhere: football, music and freedom. But now, after the killing of a British soldier, riots are spreading across the city, and nowhere is safe. While the fury swirls around them, Selvon and Ardan remain focused on their own obsessions, girls and grime. Their friend Yusuf is caught up in a different tide, a wave of radicalism surging through his local mosque, threatening to carry his troubled brother, Irfan, with it.
Visa hela texten

Guy Gunaratne throws words against the wall and makes us watch them bounce. You feel the heat, reel from the sound, and bump to the unstoppable pulse. A novel so of this moment that you don't even realize you've waited your whole life for it. -- Marlon James, author of A BRIEF HISTORY OF SEVEN KILLINGS Gunaratne has a gift for inhabiting the lives of his characters, and has used that gift here to give life to Londoners who are not often seen in contemporary fiction... a very fine novel -- Jon McGregor * New York Times * Utterly alive. Joyous in its language -- James Wood * New Yorker * A beautiful, fierce storm of a book, full of courage and hope -- Jackie Morris, author of The Lost Words What a voice. What an ear for language. No mean feat to capture the street, the nuance of black experience, the architecture of so many different lives. It's a brave and original piece of work -- Kit de Waal, author of THE TRICK TO TIME A riotous hymn to urban life... passionate, compelling * Guardian * This is cracking. Original, honest voices and a vivid portrayal of a London rarely seen in literature -- Paula Hawkins A vivid and affecting account of estate life, both blighted by frustration and elevated by dreams we can all recognise and share. Guy's characters are drawn with compassion and flair, and I was captivated by their humanity -- Stephen Kelman, author of PIGEON ENGLISH A timely read, addressing the urgent questions of our divided society. We're sure Guy is set for big things * Metro * Gritty, grotesque; graceful and beautiful. This is the London that we call home -- J J Bola This novel is a love letter to the language of London's streets and to its people, but also a blistering look at a city on the edge that'll sweep you up until you reach the book's breathless, devastating conclusion * Stylist * A blistering debut unlike anything I've read before. This is a powerful, raw, yet heartrending account of 48 hours on a London estate * BBC.co.uk * The prose remains alive, alert and subtly integrated, with various accents and non-standard Englishes raising themselves up to the same very high literary watermark. This is one of the hardest things to pull off for a prose stylist. The Dominican-born American writer Junot Diaz is, possibly, the finest living exponent of it. Gunaratne is no doubt on his way. What you are left with - always a treat though not by any stretch as essential to all writing as some would have you believe - is a prose that benefits from being read aloud. But more so, a prose that just plain deserves to be read * Irish Times * In Our Mad and Furious City is fraught and heartbreaking at the same time, with a biting, in-your-face clarity to it that you can't ignore. It's a searing marvel of a novel * Belfast Telegraph * In Our Mad and Furious City is our favourite debut of 2018. Gunaratne draws on growing up in north-west London in this tale of 48 hours on a council estate, where three young boys dream of escaping * Glamour * This riotous hymn to urban life takes a passionate, compelling look at youth culture * Guardian * Two days of race riots, three teenage boys on a north London estate and a grittily realistic patois throughout make this debut glitter despite the darkness * Evening Standard * Already hailed as a modern masterpiece, this timely and authentic portrayal of life for young men living on our city estates is as mesmerising as it is vital * Heat *

Guy Gunaratne grew up in North West London. His first novel, IN OUR MAD AND FURIOUS CITY, won the International DylanThomas Prize, the Jhalak Prize and the Authors' Club Best First Novel Award, and was longlisted for the Man Booker Prize. It was also shortlisted for the Goldsmiths Prize and the Gordon Burn Prize, and longlisted for the Orwell Prize for Political Fiction. IN OUR MAD AND FURIOUS CITY was also published in the United States, France, Italy and Sweden. Guy Gunaratne is one of the judges for the Goldsmiths Prize 2019. He lives between the UK and Sweden and has worked as a documentary filmmaker in human rights journalism.