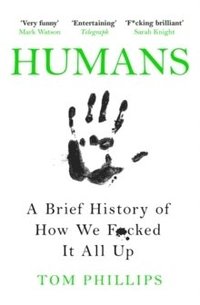 A Brief History of How We F*cked It All Up

av Tom Phillips
Häftad Engelska, 2019-04-04
109
Köp
Spara som favorit
Finns i lager! Skickas inom 1-2 vardagar.
Fri frakt inom Sverige över 159 kr för privatpersoner.
Finns även som
Visa alla 1 format & utgåvor
***THE INTERNATIONAL BESTSELLER*** 'This book is brilliant. Utterly, utterly brilliant' Jeremy Clarkson 'F*cking brilliant' Sarah Knight AN EXHILARATING JOURNEY THROUGH THE MOST CREATIVE AND CATASTROPHIC F*CK-UPS OF HUMAN HISTORY In the seventy thousand years that modern human beings have walked this earth, we've come a long way. Art, science, culture, trade - on the evolutionary food chain, we're real winners. But, frankly, it's not exactly been plain sailing, and sometimes - just occasionally - we've managed to really, truly, quite unbelievably f*ck things up. From Chairman Mao's Four Pests Campaign, to the American Dustbowl; from the Austrian army attacking itself one drunken night, to the world's leading superpower electing a reality TV mogul as President... it's pretty safe to say that, as a species, we haven't exactly grown wiser with age. So, next time you think you've really f*cked up, this book will remind you: it could be so much worse... FURTHER PRAISE FOR HUMANS: 'Very funny' Mark Watson 'A light-touch history of moments when humans have got it spectacularly wrong... Both readable and entertaining' The Telegraph 'Chronicles humanity's myriad follies down the ages with malicious glee and much wit ... a rib-tickling page-turner' Business Standard 'A timely, irreverent gallop through thousands of years of human stupidity' Nicholas Griffin, Ping-Pong Diplomacy: The Secret History Behind the Game That Changed the World
Visa hela texten

Humans is Tom Phillips' timely, irreverent gallop through thousands of years of human stupidity. Every time you begin to find our foolishness bizarrely comforting, Phillips adds another kick in the ribs. Beneath all this book's laughter is a serious question: where does so much serial stupidity take us? -- Nicholas Griffin * Ping-Pong Diplomacy: The Secret History Behind the Game That Changed the World * Chronicles humanity's myriad follies down the ages with malicious glee and much wit . . . a rib-tickling page-turner * Business Standard * Tom Phillips is a very clever, very funny man, and it shows. If Sapiens was a testament to human sophistication, this history of failure cheerfully reminds us that humans are mostly idiots -- Greg Jenner * A Million Years and a Day * Tom Phillips has proven beyond a doubt that humans are goddamn lucky to be here and are doing nearly nothing to remain relevant and viable as a species - except, that is, for writing witty, entertaining, and slightly distressing-but-ultimately-endearing books about same. And if you care to avoid orbiting the earth in a space-garbage prison of your fellow humans' design, you should probably read it -- Sarah Knight * The Life-Changing Magic of Not Giving a F*ck * A light-touch history of moments when humans have got it spectacularly wrong... Both readable and entertaining * Telegraph * If you find yourself looking at the news and wondering how humanity has got so many things wrong, over and over again, this book is a very funny answer to just that question' -- Mark Watson, comedian In dark times, it's reassuring to learn that we've always been a bunch of clueless f*cking nitwits -- Stuart Heritage * Don't Be a Dick, Pete *

Tom Phillips is the editor of Full Fact, Britain's leading independent fact-checking organisation. Previously he was the editorial director of BuzzFeed UK, where he divided his time between very serious reporting on important issues... and making jokes. Tom's first book, HUMANS: A Brief History of How We F*cked It All Up, was published in 2018, and has since been translated into more than 30 languages. Tom's second book, TRUTH: A Brief History of Total Bullsh*t was published in 2019 and has so far been translated into more than 15 languages.