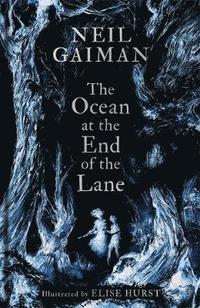 The Ocean at the End of the Lane

av Neil Gaiman
Inbunden Engelska, 2019-11-12
219
Köp
Spara som favorit
Finns även som
Visa alla 1 format & utgåvor
A special illustrated edition of The Ocean at the End of the Lane, the bestselling magical novel from master storyteller Neil Gaiman. Breathtaking illustrations by fine artist and illustrator, Elise Hurst. 'Both a pitch-perfect fantasy and a moving examination of childhood memories and their effects on our adult selves ... superb' The Times 'Some books you read. Some books you enjoy. But some books just swallow you up, heart and soul' Joanne Harris This is what he remembers, as he sits by the ocean at the end of the lane: A dead man on the back seat of the car, and warm milk at the farmhouse. An ancient little girl, and an old woman who saw the moon being made. A beautiful housekeeper with a monstrous smile. And dark forces woken that were best left undisturbed. They are memories hard to believe, waiting at the edge of things. The recollections of a man who thought he was lost but is now, perhaps, remembering a time when he was saved... The Ocean at the End of the Lane (illlustrated) Navy cloth boards with silver foil detail Head and tail bands Coloured endpapers Beautiful black and white illustrations throughout by artist, Elise Hurst
Visa hela texten

Gaiman's achievement is to make the fantasy world seem true * The Times * A book that reads like a half-remembered fairy tale from childhood... and slots perfectly into the canon of British magical fiction * New Statesman * The writer who comes closest to the being the Dahl of his generation... The Ocean at the End of the Lane has, like all good myths, a power that defies explanation * Sunday Express * Within a few pages you know you're reading a future classic * Stylist * told with a rare understanding of all that makes us human, and shows the power of stories to reveal and shelter us from the darkness inside and out. * Mid-West Times * This is fantasy at its very best and this book is one any Gaiman fan will proudly display on their shelf * Culturefly *

NEIL GAIMAN is the bestselling author and creator of books, graphic novels, short stories, film and television for all ages, including American Gods, Neverwhere, Coraline, The Graveyard Book, The View from the Cheap Seats, Norse Mythology and the critically acclaimed television adaptation of Good Omens. The recipient of numerous literary honours, Neil has written scripts for Doctor Who, worked with authors and artists including Terry Pratchett, Chris Riddell and Dave McKean, and Sandman is established as one of the classic graphic novels. In 2017, he became a Goodwill Ambassador for UNHCR, the UN Refugee Agency. As George R. R. Martin says: 'There's no one quite like Neil Gaiman.' Twitter @neilhimself ELISE HURST is a writer, illustrator and fine artist based in Melbourne, Australia. Raised on a diet of Impressionism, apocalyptic lithography and Enid Blyton, it was inevitable that she would illustrate this book. www.elisehurst.com