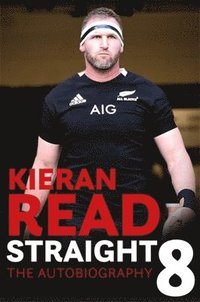 av Kieran Read
Inbunden Engelska, 2019-11-14
239
Köp
Spara som favorit
Skickas inom 3-6 vardagar.
Fri frakt inom Sverige för privatpersoner.
Finns även som
Visa alla 3 format & utgåvor
As Kieran Read calls time on his distinguished New Zealand career at the end of the Rugby World Cup, this is the open and honest life story of one of rugby's greatest players, a legendary All Black and a two-time World Cup winner. Kieran Read first played for the All Blacks as a 23-year-old in 2008 and since then has amassed more than a century of Test appearances in the famous jersey. Now, after a stellar provincial, club and international career - including back-to-back World Cup victories - the New Zealand captain writes openly and honestly about his time in the game. Read takes to these pages with his trademark determination, lifting the lid on the unique pressures of succeeding as captain the most celebrated All Black of all time (Richie McCaw). He outlines the decisions that molded his career and uncovers the skills of the coaches who shaped him, while offering readers an inside account of how the world's greatest team functions and thrives. Read unpacks the emotional toll of injury and the ignominy of defeat, neatly illustrating the intense experience of representing a rugby-obsessed nation while delivering a masterclass in how to manage the many demands on the mind and on the body. Forthright and frank, Read's well-respected views on the game and its future are a must-read for rugby fans, and his take on the myriad personalities and the peccadilloes of his team-mates, coaches and opponents will be sure to surprise and delight. From the playing fields of Papakura to the summit of the sport, Read has faced every challenge head on. His life story if no exception.
Visa hela texten

one of the greats of our game ... a fantastic leader - Steve Hansen (All Blacks Head Coach)

Born in Papakura in 1985, Kieran Read has won the Rugby World Cup twice - in 2011 and then again in 2015. He is the third most-capped All Black of all time and has captained his country since 2015. He was New Zealand Player of the Year in 2010 and 2013, and World Rugby Player of the Year in 2013. With Crusaders, Read is a four-time Super Rugby winner - in 2008, 2017, 2018 and 2019. Kieran Read was assisted in the writing of his autobiography by sports broadcaster and writer Scotty Stevenson. Stevenson has covered rugby at all levels in New Zealand and abroad, from school derbies to Rugby World Cups. He has also reported on, and presented coverage of, Summer and Winter Olympics and Commonwealth Games. He is the author of six sporting biographies and is a regular columnist and contributor for a number of media outlets. He lives in Auckland and is currently a commentator and senior reporter for Spark Sport and TVNZ.