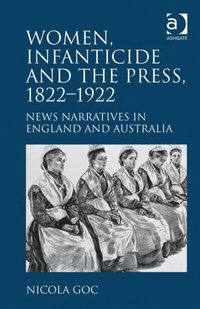 News Narratives in England and Australia

'... this is a meticulous book of the infanticidal actions of young women in England and Australia in the 19th and early 20th centuries. It demonstrates their desperation, their resistance, and in some cases their deaths against the social, political and legislative history of the day as reported by the press. This book will have particular appeal for crime news researchers, for those interested in the lives and stories of women, and for fans of Foucault.' Pacific Journalism Review 'Goc's study provides many fascinating insights and her inclusion of case studies serves to illustrate the lives and experiences of the working-class women who became inserted into public, political and press discourse after killing their children.' Crime, Media, Culture 'The real value of Goc's work is that she captures infanticide as an 'all-powerful' action - the decision that another being would live or die - carried out by predominantly marginalised and powerless people.' Australian Historical Studies 'Nicola Goc has made an important contribution to our knowledge of infanticide and its imbrication with patriarchal discourses, and to our understanding of the part played by the media in influencing attitudes and values and in creating meaning.' SHARP News 'The strength of this book is that it provides a legal, medical, patriarchal and historical context for this suffering that is detailed, thorough and couched in a clear and useful theoretical framework.' Journal of Australian Colonial History