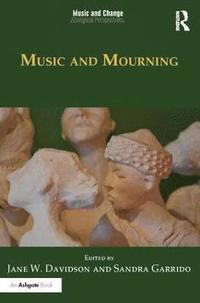 av Dr Sandra Garrido, Jane W Davidson
Inbunden Engelska, 2016-05-18
1529
Köp
Spara som favorit
Skickas inom 10-15 vardagar.
Fri frakt inom Sverige för privatpersoner.
Finns även som
Visa alla 3 format & utgåvor
While grief is suffered in all cultures, it is expressed differently all over the world in accordance with local customs and beliefs. Music has been associated with the healing of grief for many centuries, with Homer prescribing music as an antidote to sorrow as early as the 7th Century BC. The changing role of music in expressions of grief and mourning throughout history and in different cultures reflects the changing attitudes of society towards life and death itself. This volume investigates the role of music in mourning rituals across time and culture, discussing the subject from the multiple perspectives of music history, music psychology, ethnomusicology and music therapy.
Visa hela texten

Jane W. Davidson is a singer and stage director with research interests in performance and expression, voice, musical development and wellbeing. She was Editor of Psychology of Music (1997-2001), Vice-President of the European Society for the Cognitive Sciences of Music (2003-2006) and President of the Musicological Society of Australia (2010-2011). She is currently Professor of Creative and Performing Arts (Music) at The University of Melbourne and Deputy Director of the Australian Research Council Centre of Excellence for the History of Emotions. She has published over 100 scholarly contributions and secured a range of grants and awards in both Australia and overseas. Sandra Garrido is a pianist, violinist and researcher in music psychology. She completed her PhD at the University of New South Wales and subsequently spent several years in post-doctoral research at the Melbourne Conservatorium of Music and the Australian Research Council Centre of Excellence for the History of Emotions, exploring the use of music in depression in both the modern day and historically. She is currently a National Health and Medical Research Council and Australian Research Council Dementia Research Fellow at the MARCS Institute for Brain, Behaviour and Development at Western Sydney University. She has published over 30 academic publications including a book co-authored with Jane Davidson entitled My Life As A Playlist (2014).