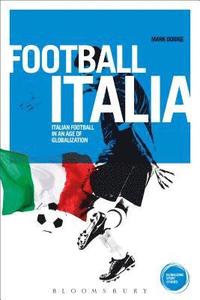 Italian Football in an Age of Globalization

av Dr Mark Doidge
Inbunden Engelska, 2015-05-21
1119
Köp
Spara som favorit
Finns även som
Visa alla 1 format & utgåvor
This book is available as open access through the Bloomsbury Open Access programme and is available on www.bloomsburycollections.com. Football has undergone a period of transformation over the last thirty years. Despite these global processes, different national leagues have adapted in different ways. After an initial period of success directly after Italia '90, Italian football has gone through a period of sustained crisis. It has been blighted by financial mismanagement, corruption scandals and fan violence. This has impacted Italy's ability to compete on a global stage. Football Italia accounts for the development of Italian football in relation to the wider global transformations impacting football and addresses the reasons for Serie A's initial success and current malaise. Theoretically, this book locates Italian football within the wider power network of the state and how this has impacted political engagement. After an historical overview of the Italian political economy, Football Italia highlights how football is part of the wider political network. Football clubs are owned by powerful businessmen (and they are all men) who are also politicians. This centralisation of power within a small hegemonic group inhibits change. Within this broader structure, wider corruption scandals continue; from regular match-fixing scandals to doping. Meanwhile, stadiums are crumbling and police over-aggressive. It is within this context that we must place the fans. Both the ultras and supporters who attend official supporters' clubs are disaffected and without the power to change the status quo. Consequently, Italian football has been in decline throughout the 21st century.
Visa hela texten

Few football books manage to provide the breadth and depth of insight with the very obvious passion for the game that Mark Doidge combines in writing Football Italia. From the country of Gramsci and Mussolini it is no surprise that Italian football also is a game of extremes. What Doidge manages to explain is how a nation's football can never be divorced from how a national culture has been shaped too. -- Mark Perryman * The Morning Star * Following the extraordinary success of its World Cup in 1990, chic Italian football assumed a position of sporting and cultural dominance in Europe for over a decade. No longer. In a clinical dissection, Mark Doidge shows how the neo-patrimonialism of Silvio Berlusconi's regime, which facilitated the rapid advance of Italian football two decades ago, has ensured its eventual stagnation and decline today. Ironically, while it is easy to disparage the commercialisation of English football, Doidge demonstrates what happens to a footballing nation which is too corrupt to reform itself when federations, clubs, media and government are too weak or self-interested to insist upon change. This book represents a very significant advance for the contemporary sociology of sport in the United Kingdom and will be essential reading to all interested in European football. * Anthony King, Professor of Sociology, University of Exeter, UK * Mark Doidge's research effectively illustrates characters, origins and developments of the decline of football in Italy. Football is investigated as a social subsystem characterized by interactions with political processes and social changes. The analysis of the causes of the decline thus helps to understand why it represents a metaphor of the crisis of the larger social system. The documentation offers an updated and complete review of investigations and points of view by providing a critical contribution of great interest. * Professor Nicola Porro, University of Cassino and Southern Lazio, Italy * Through incisive and persuasive analysis, Mark Doidge investigates the factors that have led Italian football to its present crises. By examining both the actions of individuals and structural considerations, he finds that the problems of Italian football have their origins in Italian history and the country's incapacity to effectively manage globalization. * Mauro Valeri, Head of The National Office of Racial Antidiscrimination and formerly Professor of Sociology, La Sapienza University of Rome, Italy * [Doidge] assesses the rise and fall of calcio since Italia 90, placed in the country's social, political and economic contexts. It's a long read, but a good one. * Four Four Two *

Mark Doidge is Lecturer in Sport and Service Management, University of Brighton, UK

1. Introduction - Globalisation and Italian Football 2. Globalisation and Community 3. Modernity and Deregulation in Italy 4. Deregulation and Crisis in Italian football 5. The Tempest: A Twenty-First Century of Scandal 6. The Matchday Experience: Italian Stadiums 7. The Matchday Experience: Italian Forces of Order 8. The Matchday Performance: Football Fandom in Italy 9. The Livornesi Performance: The Local and the Political 10. The Social Capital of Italian Supporters' Clubs 11. Conclusion: 'Year Zero?