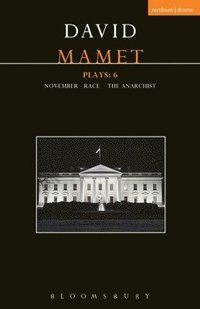 av David Mamet
Häftad Engelska, 2015-09-24
219
Köp
Spara som favorit
Skickas inom 10-15 vardagar.
Fri frakt inom Sverige för privatpersoner.
Finns även som
Visa alla 2 format & utgåvor
Race Sparks fly when three lawyers - two black and one white - and a defendant clash over the issue of race and the American judicial system. Drawing on one of the most highly charged issues of American history, David Mamet forces us to confront deep-seated prejudices and barely healed wounds in this unflinching examination of the lies we tell ourselves and the truths we unwillingly reveal to others. November It's November in a Presidential election year and incumbent Charles Smith's chances for re-election are looking unlikely. Approval ratings are down, his money's running out, and nuclear war might be imminent. But Chuck isn't ready to give up just yet. November is a hilarious take on the state of contemporary America. The Anarchist Cathy is a woman who has served 35 years of a life sentence for killing a policeman in a botched robbery. Her prison officer Ann must decide whether or not to grant her parole. Mamet once again employs his signature verbal jousting in this battle of two women over freedom, power, money, and religion.
Visa hela texten

Mamet is a connoisseur of fiasco, knows all about legal punctilio, and he has great fun bringing mayhem to the ritual * New Yorker * [Mamet's characters] are at each other's throats with a wit akin to characters out of Wilde and a vengeance not unlike those from Pinter or Edward Albee * Boston Globe * The finest American playwright of his generation * The Sunday Times * No modern playwright has been bolder or more brilliant. * New Yorker * Pinter, Albee, Miller. They're all looking over Mamet's shoulder * New Yorker * These are brilliant plays by a writer at the height of his powers, and it is surprising that they mostly failed on Broadway. But perhaps Mamet has proved to be ahead of his time, since each of these works anticipates aspects of American life that came to the fore after it was staged ... One is tempted to think that the more powerful and politically pertinent the play, the greater the likelihood of its absence from the big international stages. These are plays that deserve revival. * Times Literary Supplement *

David Mamet is one of America's most important contemporary writers. He won the Pulitzer Prize and received Tony nominations for his plays Glengarry Glen Ross and Speed-the-Plow. As a screenwriter, he received Oscar nominations for The Verdict and Wag the Dog. He is a founding member of the Atlantic Theater Company. Many of his plays have been premiered by the St Nicholas Theatre company, Chicago, of which Mamet was a founding member and Artistic Director. In 1978 he became Associate Artistic Director of the Goodman Theatre, Chicago, where American Buffalo had been first staged in 1975, subsequently winning an Obie Award and opening on Broadway in 1977 and at the National Theatre in 1978. His greatest hits, Glengarry Glen Ross and Oleanna, followed in 1983 and 1993 respectively. Mamet received the PEN/Laura Pels International Foundation for Theater Award for Grand Master of American Theater in 2010.