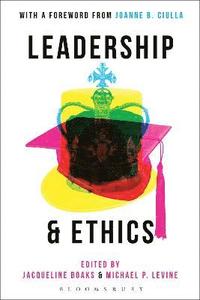 av Jacqueline Boaks, Michael P Levine
Inbunden Engelska, 2015-09-24
1259
Köp
Spara som favorit
Skickas inom 10-15 vardagar.
Fri frakt inom Sverige för privatpersoner.
Finns även som
Visa alla 3 format & utgåvor
Contemporary discussions about the nature of leadership abound. But what constitutes a good leader? Are ethics and leadership even compatible? Accounts of leadership often lie at either end of an ethical spectrum: on one end are accounts that argue ethics are intrinsically linked to leadership; on the other are (Machiavellian) views that deny any such link-intrinsic or extrinsic. Leadership appears to require a normative component of virtue; otherwise 'leadership' amounts to no more than mere power or influence. But are such accounts coherent and justifiable? Approaching a controversial topic, this series of essays tackles key questions from a range of philosophical perspectives, considering the nature of leadership separate from any formal office or role and how it shapes the world we live in.
Visa hela texten

Just what leadership studies needs: a collection that takes philosophy seriously. The editors rightly recognize that substantive philosophical issues cannot be resolved with data and definitions. The result is a book that takes up the hard questions of leadership. * Terry L. Price, Professor of Leadership Studies and Philosophy, Politics, Economics and Law, Jepson School of Leadership Studies, University of Richmond, USA *

Jacqueline Boaks studied philosophy at The University of Western Australia, Australia. She is completing her PhD in Philosophy looking at leadership in the areas of ethics, political philosophy and business literature. Michael P. Levine is Winthrop Professor of Philosophy at the University of Western Australia, Australia. His publications include: Politics Most Unusual: Violence, Sovereignty and Democracy in the 'War on Terror' (with Damian Cox and Saul Newman 2009), Prospects for an Ethics of Architecture (with Bill Taylor, 2011) and The 'Katrina Effect' (with Bill Taylor, Oenone Rooksby and Joely-Kym Sobott, Bloomsbury 2015).