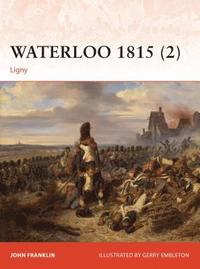 av John Franklin
Häftad Engelska, 2015-02-20
219
Köp
Spara som favorit
Finns även som
Visa alla 2 format & utgåvor
This title represents the second instalment of the captivating study of the Waterloo campaign, one of the defining events in European history. In particular it focuses on the desperate struggle for Ligny, which saw the Prussians pushed back by the French Army after heavy fighting in what was to be Napoleon's last battlefield victory. With Wellington unable to assist his Prussian allies in time, the Prussian centre was overwhelmed as night began to fall, although the flanks were able to retreat in some semblance of order. Stunning illustrations augment the drama of the fighting in this area while considerable new research drawn from unpublished first-hand accounts provide a detailed and engaging resource for all aspects of the battle.
Visa hela texten

John Franklin is a professional military historian based in Switzerland who specializes in the Napoleonic period, and the Waterloo campaign in particular. A Fellow of the International Napoleonic Society (FINS), and a graduate of the University of Bern, he has been engaged in one of the most comprehensive investigations of the campaign ever undertaken, with the aim of providing a wealth of previously unpublished material on the various armies and contingents present during the dramatic climax to this important period of European history. The vast majority of his work is based on manuscript and archival sources, with the emphasis on primary research. He is the author of the acclaimed books of correspondence on the Hanoverian and Netherlands armies, with further publications on the French and Prussians scheduled. Gerry Embleton has been a leading illustrator and researcher of historical costume since the 1970s, and has illustrated and written Osprey titles on a wide range of subjects over more than 20 years.