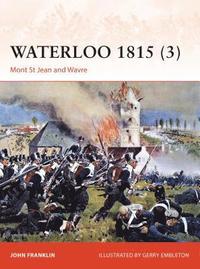 av John Franklin
Häftad Engelska, 2015-06-20
179
Köp
Spara som favorit
Finns även som
Visa alla 2 format & utgåvor
Waterloo is one of the defining campaigns of European history. The name conjures up images of the terrible scale and grandeur of the Napoleonic Wars and the incredible combined effort that finally ended Napoleon's aspirations of power in Europe. Drawn from unpublished first-hand accounts, and using detailed illustrations, this comprehensive volume is the ideal resource for studying the intense fighting at the battles of Waterloo and Wavre, the final, decisive engagements of the Waterloo campaign. Those two battles are at the heart of this study, which explores the action at Mont St Jean where Wellington managed to hold the French at bay until the arrival of the Prussians under Blucher saw the Allies secure a hard-fought victory at the dramatic climax of the 'Hundred days'.
Visa hela texten

"This book manages to be both comprehensive and concise as it outlines how Wellington managed to hold on until Field Marshal Gebhard von Blucher's Prussians arrived in force to help seal Napoleon's defeat." --Toy Soldier & Model Figure

John Franklin is a professional military historian based in Switzerland who specialises in the Napoleonic period, and the Waterloo campaign in particular. A Fellow of the International Napoleonic Society (FINS), and a graduate of the University of Bern, he has been engaged in one of the most comprehensive investigations of the campaign ever undertaken, with the aim of providing a wealth of previously unpublished material on the various armies and contingents present during the dramatic climax to this important period of European history. The vast majority of his work is based on manuscript and archival sources, with the emphasis on primary research. Gerry Embleton has been a leading illustrator and researcher of historical costume since the 1970s, and has illustrated and written Osprey titles on a wide range of subjects over more than 20 years. He is an internationally respected authority on 15th and 18th century costumes in particular.