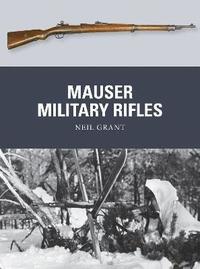 av Neil Grant
Häftad Engelska, 2015-03-09
159
Köp
Spara som favorit
Skickas inom 10-15 vardagar.
Fri frakt inom Sverige över 159 kr för privatpersoner.
Kan tyvärr inte längre levereras innan jul.
Finns även som
Visa alla 2 format & utgåvor
This volume offers an insight into the iconic Mauser family of German bolt-action rifles. Drawing on first-hand accounts of the weapons in combat and primary sources regarding their mechanical performance, this fully illustrated study charts the Mauser's origins, combat record and lasting influence. It explores the full range of Mauser rifles, beginning with the hugely successful Gew 98, which entered service in the time of the Kaiser, provided the basis for the US Springfield M1903 and equipped combatants such as the South African Boers. It also investigates the Kar 98k, which was still in front-line use with Wehrmacht troops in 1945, saw use with Mexican and Yugoslavian forces, and even played a role in the 1990s Balkan conflicts in the hands of snipers. Featuring expert analysis, specially commissioned artwork and gripping first-hand accounts, this volume is ideal for anyone seeking an understanding of these sturdy and accurate rifles' unique place in the history of small-unit tactics in the 20th century.
Visa hela texten

Neil Grant studied archaeology at Reading University, and now works for English Heritage. His interests include firearms, medieval edged weapons and Classical and medieval horsemanship. Peter Dennis was born in 1950. Inspired by contemporary magazines such as Look and Learn he studied illustration at Liverpool Art College. Peter has since contributed to hundreds of books, predominantly on historical subjects, including many Osprey titles. Peter created the battlescene artwork for this volume. Born in Malaya in 1949, Alan Gilliland studied photography/film and architecture, and has worked as a photojournalist and cartoonist. He also spent 18 years as the graphics editor of The Daily Telegraph, winning 19 awards in that time, including numerous UK Press Awards. He now writes, illustrates and publishes fiction (www.ravensquill.com), as well as illustrating for a variety of publishers (www.alangilliland.com). Alan completed the cutaway illustration for this book.

Introduction /Development: Forging a legend /Use: Facing the test of battle /Impact: The right arm of the German soldier /Conclusion /Bibliography /Index